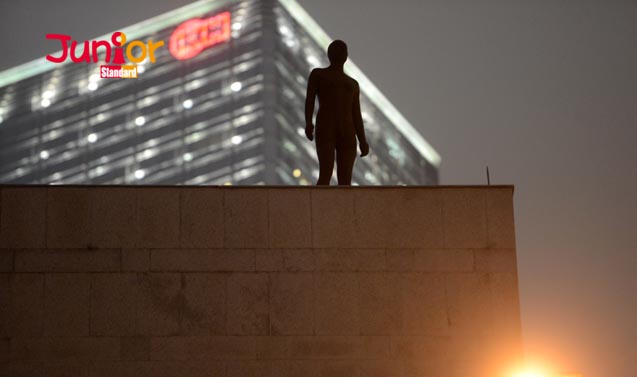 WHEN you look up at a building and see a man standing on the edge of the roof these days, do not call the police just yet. What you thought is a would-be suicide jumper might just be one of the sculptures created by British artist Antony Gormley.

His famous Event Horizon, described as “the largest public art project ever installed in Hong Kong”, is now on until May.

It consists of 31 sculptures mounted at both street level and building tops across Hong Kong’s Central and Western districts.

The fibreglass figures, modelled on the artist’s body, are “looking out into space, questioning how the built world relates to an inherited earth”.

But passers-by might instead question whether it was a man about to jump off a building as the sculpture can easily be mistaken to be a real person.

In fact, that was what happened when the show was staged in other cities worldwide. New York City police had to proactively give the public a heads-up when the sculptures were placed in the city.

The artist said, “The principle dynamic of the work is the relationship between imagination and the horizon, involving the citizen in a game of seeking and perhaps finding,” Gormley said.

He hopes Event Horizon would make Hong Kong “a place of reverie that invites reflection on human nature and our place in the wider scheme of things”.

(This article is published on Junior Standard on 24 November 2015)

The remark that...
Animation artist Davy Liu has ...