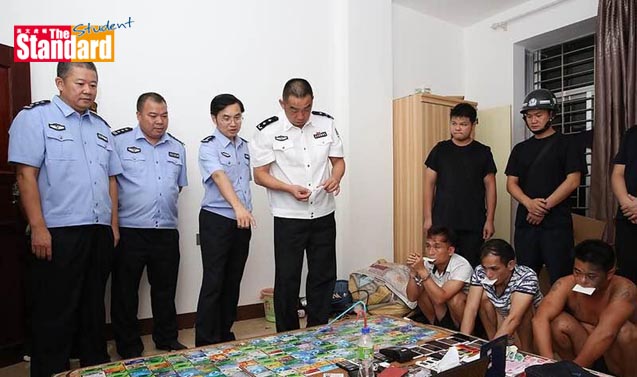 A statement on the ministry’s website said the suspects were flown back to Beijing (北京) and three other Chinese cities aboard chartered flights. They are suspected of committing over 4,000 major cases of cross-border telephone fraud targeting victims in more than 20 cities and provinces, the ministry said.

According to the ministry, such fraud cases are among the fastest-growing categories of crime and some of the most difficult to solve. Police in Cambodia said the group detained there had set up their operation in rented homes in the beach resort town of Sihanoukville (施亞努市), and that authorities were still seeking the masterminds.

The ability to exploit electronic bank transfers from a safe distance, hide identities and constantly vary the nature of their scams allowed those criminals to continue misleading victims and avoid detection, the ministry said.

Such scams generally involve suspects taking on a wide range of false identities in order to obtain personal information or prompt victims into transferring funds into overseas bank accounts.

Previously busted syndicates have involved scammers posing as staff from banks, telecommunications firms, social security and public healthcare agencies demanding payment of non-existent fees or account balances. Others would pose as police or postal service staff claiming to be investigating crimes such as drug smuggling and money laundering and demanding personal information to clear the victims of suspicion.

Still others would pretend to offer cheap air or train tickets, low-interest loans or contraband such as drugs, firearms and surveillance equipment.