Meeting off as too few show up 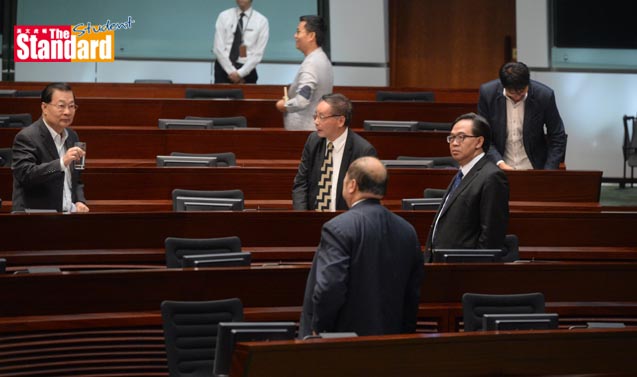 FOR the first time since the start of the new legislative year in mid-October, a Legislative Council (立法會) meeting was adjourned owing to a lack of numbers.

After the quorum bell rang for the fourth time last Thursday, and allowing 15 minutes for half the 70 Legco members to be present, only 34 turned up and the meeting was adjourned.

The meeting was called to debate a motion by Democratic Party (民主黨 ) member Helena Wong Pik-wan (黃碧雲) on whether the Prevention of Bribery Ordinance (防止賄賂條例) should be extended to cover the chief executive.

Half the pro-establishment and some pan-democratic lawmakers were not in the chamber, including Legco president Jasper Tsang Yok-shing (曾鈺成).

Tsang said those who were absent, including himself, owe an explanation to the public but he said it would be unfair to put the blame solely on them.

But Tsang said it would be impractical to require every member to stay throughout the council meetings. “It has always been a tradition of this council for members to only stay in the chamber when it is their turn to speak or to vote or to raise a question. At other times, members may have other duties to undertake which require them to leave the chamber,” he said.

Tsang explained that he was discussing “some matters” with secretariat staff in his office, but was unaware that the bell had “stopped so soon”.

Application of the Prevention of Bribery Ordinance to the chief executive
www.legco.gov.hk/yr05-06/english/panels/ca/ca_ce/papers/cace1101ls115e.pdf