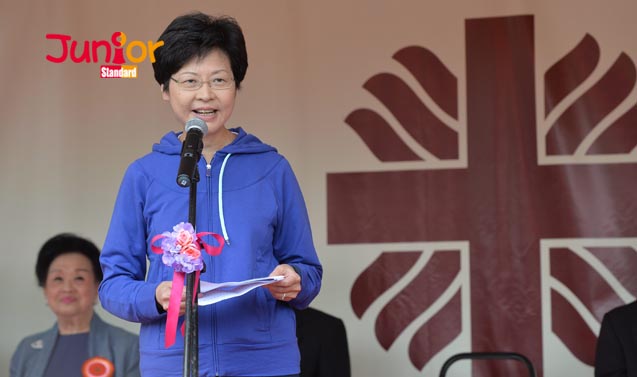 THE chief secretary quoted a biblical passage while insisting the government’s efforts to help the poor are “righteous”.

Carrie Lam Cheng Yuet-ngor, (林鄭月娥) a Catholic, said the government has taken antipoverty measures and helped the elderly and the vulnerable.

“Blessed are they who are persecuted for the sake of righteousness, for theirs is the kingdom of heaven,” she said during a speech at the Caritas Bazaar (明愛賣物會).

Before her speech, Lam was praised by the Catholic Bishop of Hong Kong, Cardinal John Tong Hon, (天主教香港教區主教湯漢) who is also a director of Caritas, for her help with the event. Lam thanked Tong for his encouragement and then repeated the Bible quote she heard at a mass.

“In fact, when the government does righteous things, we are always criticised,” she said.

She declined to specify the “righteous things” to which she referred.

Lam’s quotes from the bible did not appear in the press release of her speech issued by the Information Services Department (政府新聞處).

Lam’s press secretary explained that they were not included as Lam added them herself while speaking.

Lam has recently taken a more forceful approach when dealing with her critics.

Lam also used the parable of the Good Samaritan to praise the work of local charitable organisations in helping “thy neighbour”.