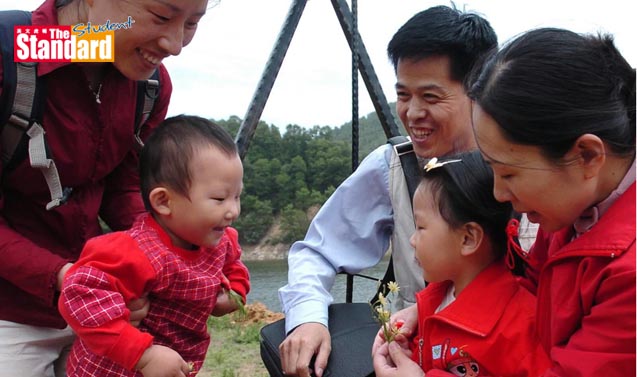 BEIJING (北京) has ended its controversial one-child policy after decades of strict enforcement left it with an ageing population and shrinking workforce, heightening the challenges of slowing growth.

All couples will be allowed two children, Xinhua News Agency (新華通) reported, citing a communique by the Communist Party (共產黨) following the fifth plenary session in the capital. The historic change is “intended to balance population development and address the challenge of an ageing population”.

Demographic changes will take decades to have an effect and previous loosenings have led to fewer extra births than expected.

The policy, instituted in the late 1970s, restricted most couples to only a single offspring and for years authorities argued that it was a key contributor to the economic boom. It was enforced by a commission that ordered fines for violators and often forced abortions, leading to heart-rending tales of loss for would-be parents.

But the world’s largest population at 1.37 billion is now ageing, gender imbalances are severe – baby boys are preferred to girls – and its workforce is shrinking. The concerns led to limited reforms in 2013, including allowing a second child for some couples in urban areas, but few have taken the opportunity.

It is “good news for the couples who wish to have a second child”, Maya Wang (王松蓮) of Human Rights Watch (人權觀察) said, but “the restrictions on reproduction rights remain in China.

“As long as the quotas and system of surveillance remains, women still do not enjoy reproductive rights.”