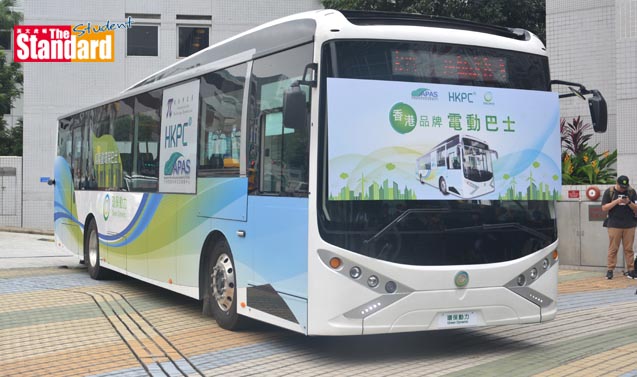 THE iconic trams may soon have a silent partner – electric buses. The idea of fume-free buses was mooted by the Hong Kong Productivity Council (香港生產力促進局). Co-developer Green Dynamic Electric Vehicle (環保動力電動汽車) is now holding discussions with Kowloon Motor Bus (九龍巴士) and other bus companies on their use.

The single-decker bus developed by a Hong Kong team of professionals is tailor-made for the SAR’s hilly and narrow roads.

Lead researcher Lawrence Cheung Chi-chong (張梓昌) said it could perform all the functions of conventional single-decker buses, including running at a maximum speed of 70 kilometres an hour with a full load of 75 passengers.

The project that took two years and HK$40 million of government funding is in the final stages of road testing in Hong Kong following nine months of tests in Dongguan (東莞) and Chongqing (重慶).

Green Dynamic chief Andrew Yung Ka-wo (容嘉和) said some bus companies had imported electric buses from the mainland but decided not to use them as they were not suitable for Hong Kong.

He said the response to the new electric bus has been positive.

“The bus companies said they support our model in principle, but said we have to ask the government to work on the shortage of electric charging stations around the city,” he said.

Although each electric bus costs around HK$4 million – double that of buses powered by petrol – Yung said it is more sustainable in the long run as electricity charging is cheaper. It also emits zero greenhouse gases.