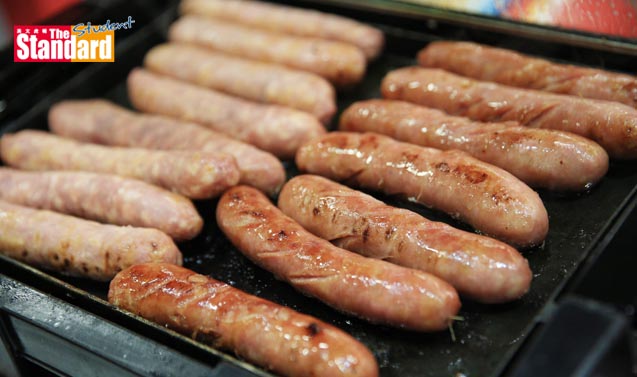 THE World Health Organisation (世界衛生組織) declared on Monday that processed meats raise the risk of colon and stomach cancer and that red meat is probably harmful, too.

Meat producers are angry, vegetarians are feeling vindicated, and cancer experts are welcoming the most comprehensive pronouncement yet on the relation between our modern meateating lifestyles and cancer.

The WHO’s International Agency for Research on Cancer (IARC, 國際癌症研究機構) in Lyon (里昂), France (法國), analysed decades of research and for the first time put processed meats in the same danger category as smoking or asbestos.

The results are not that shocking in the US, where many parents fret over chemicals in processed meats and the American Cancer Society (美國癌症協會) has long cautioned against eating too much steak and processed meat.

But the UN agency’s findings could shake up public health attitudes elsewhere, such as in European (歐洲) countries where sausages are savoured and smoked ham is a delicacy.

And they could hurt the American meat industry, which is arguing vigorously against linking their products with cancer, contending that the disease involves a number of lifestyle and environmental factors.

Colon cancer is the No 2 cancer for women worldwide and No 3 for men, according to the WHO.

A group of 22 scientists from the IARC evaluated more than 800 studies from several continents about meat and cancer. The studies looked at more than a dozen types of cancer in populations with diverse diets over the past 20 years.

Based on that analysis, the IARC classified processed meat as “carcinogenic to humans”, noting links in particular to colon cancer.

Q&A on the carcinogenicity of the consumption of red meat and processed meat
www.who.int/features/qa/cancer-red-meat/en