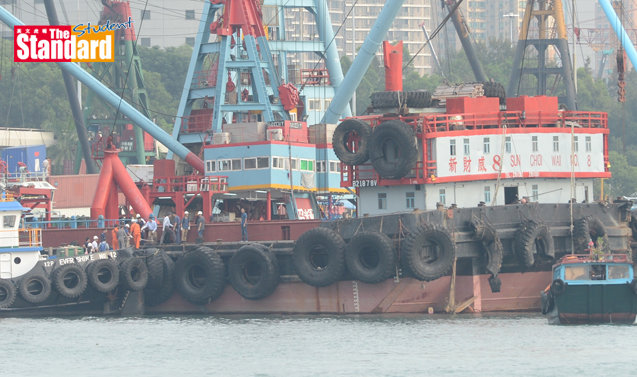 A BLAME game has begun after the arrests of three seafarers in the wake of a crane-equipped barge hitting the Lantau Link’s (青嶼幹線) Kap Shui Mun Bridge (汲水門大橋) and all but stopping passenger traffic to and from Hong Kong International Airport (香港國際機場) last Friday.

The three were released on bail as an investigation continued about how the raised crane came to hit the underside of the bridge. The three are the 62-year-old captain of the tow boat, named Lai, and two members of the barge crew Leung, 56, and Sin, 39, who must report to police at the end of the month.

Experts from the Highways Department (路政署) have inspected the bridge, which was closed for two hours on Friday night after the barge under tow and heading for the Yau Ma Tei Typhoon Shelter (油麻地避風塘) struck it.

Police put the barge’s height at 43 metres with its crane raised. That is two metres more than the clearance height for the bridge.

A representative of the barge company said the fault lay with someone on the tow boat as the barge crew cannot determine its course.

“It’s not the problem of the crane,” claimed the representative, Chan. “There are cranes even taller, but for many years there was no problem.”

It had happened, he claimed, because “the tow boat captain took the wrong course, made the wrong judgement. It’s a matter of conduct”.

Because the barge is without power, he added, it could not set itsv course. “It relies on the tow boat.”

The barge was towed away for repairs when it experienced a mechanical malfunction.

(This article is published on Junior Standard on 28 October 2015)