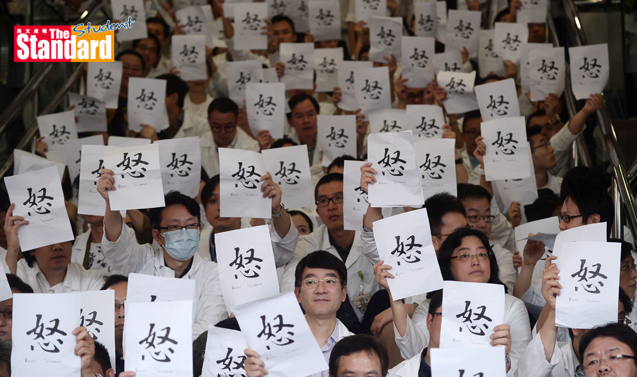 THE Hospital Authority (醫院管理局) board has unanimously agreed on a 3 percent pay rise for senior public doctors in a sharp turnaround after a silent protest by 1,300 “white coats”.

Chairman John Leong Chi-yan (梁智仁) said: “The board members, including two government officials, have unanimously agreed in principle to support this, subject of course to the financial committee having a very detailed analysis of the possibility of funding, long-term implications as well as the fact that it will not diminish existing services.”

He said the board will try to make arrangements to meet the 1 November deadline set by consultants and supervisors, who told the Hong Kong Public Doctors’ Association (香港公共醫療醫生 協會) that they will start cutting down their administrative work if they do not receive a satisfactory reply.

“The date, we will try to accommodate, but we cannot say for sure,” Leong added.

The association said it welcomed the “initial positive response” and would withhold industrial action pending the board’s decision on 19 November.

“We demand the authority’s professional salaries scale be pegged with the government equivalent rate unless a mutually agreed mechanism can be established in the future,” the association added.

The authority’s chief executive, Leung Pak-yin (梁栢賢), said: “Now it’s the details of the financial arrangement that we need to discuss.

“If all goes well, hopefully we can reach a resolution at the 19 November board meeting.”

The authority’s announcement came just a day after 1,300 doctors gathered in a 90-minute sit-in at Queen Elizabeth Hospital, demanding “respect for doctors” and a mechanism in which public doctors’ pay is closely linked to that of civil servants.