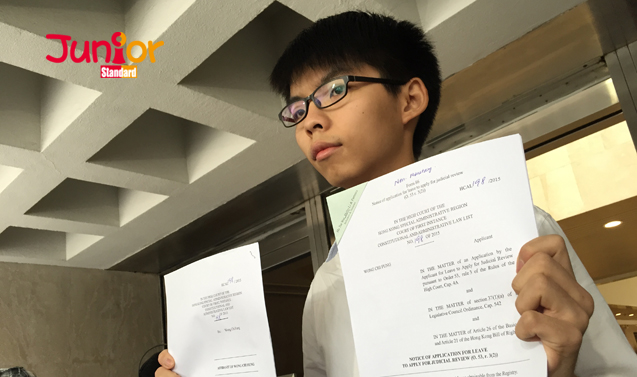 THERE does not appear to be a strong desire within society to let younger people stand for the Legislative Council election, Carrie Lam Cheng Yuet-ngor (林鄭月娥) said. The acting chief executive (署理行政長官) was responding to a judicial review mounted by Scholarism (學民思潮) convener Joshua Wong Chi-fung (黃之鋒), 19, to have the minimum age for candidates lowered from 21 to 18.

The 19-year-old student activist said he will consider his candidacy if his application is successful.

“So far in the process of taking forward Hong Kong’s democratic development and in discussions with the Legislative Council and with the public on electoral arrangements, we have not received a very strong desire to lower the age from 21 to 18,” Lam said.

“This matter, this hypothesis, will it be entertained [by the court]? Will there be a result? Is there enough time to amend laws?”

She added: “Even if there is a strong desire, whether we can amend the laws in time ... these are all unknowns. But it looks like time is very tight if we are to make the amendments.”

Lam would not comment on whether the government needs to review the relevant stipulations in the Legislative Council Ordinance as “the matter has already entered judicial proceedings”. Wong submitted his legal aid application on 12 October. He said his chance of winning is 50-50.

“Even if we win, the government could appeal and people aged between 18 and 20 will not get enough time to submit nominations next July for the Legco election,” he said.