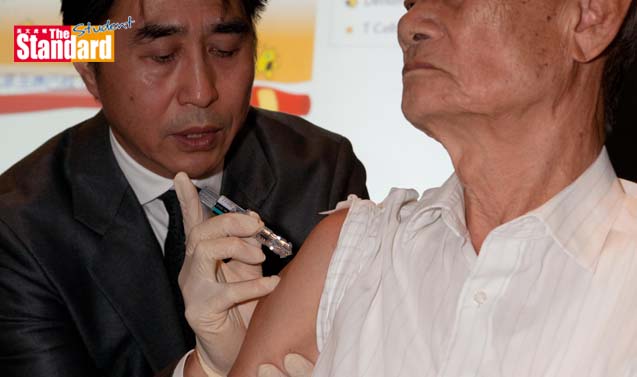 A STEPPED-UP, HK$20m programme to vaccinate vulnerable people against flu begins on Thursday with the H3N2 strain that took nearly 500 lives in Hong Kong early this year set to strike again.

Health authorities who have planned for a programme running in phases are offering free jabs to all people over 65, and free or subsidised vaccinations at HK$160 to the intellectually challenged.

The controller of the Centre for Health Protection (衞生防護中心), Leung Ting-hung (梁挺雄), said that in view of outbreaks hitting the elderly and people with underlying illnesses severely early this year “we will expand the scope to encourage all elderly aged 65 or above to receive free vaccinations”.

And a more comprehensive vaccination approach will be adopted for people with intellectual disabilities. They are now in the programme, Leung said, as they “may not be able to take good care of themselves and ... be at high risk”.

About 259,000 doses of the flu vaccine were administered in the last outbreak.

Others eligible for priority shots in the opening stages of the vaccination programme include chronically ill children, elderly people attending clinics, social security assistance recipients aged 50 or over, women who are pregnant and going to public clinics, and poultry workers.