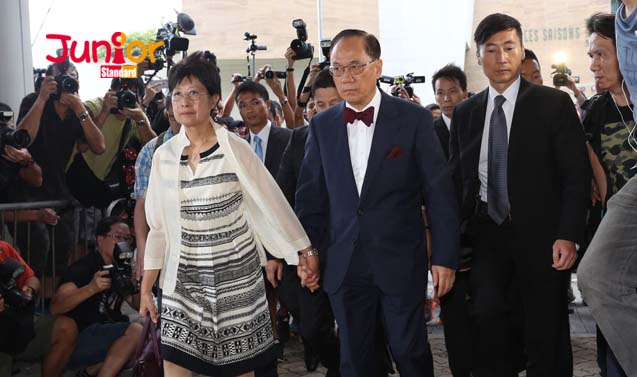 FORMER Chief Executive Donald Tsang Yam-kuen (曾蔭權) was charged with two counts of “misconduct in public office” by the ICAC.

He is the highest official ever prosecuted in Hong Kong.

The charges were laid after an investigation of nearly four years, made in response to complaints to the graft-fighting body.

The first charge alleges his failure to disclose his interest in relation to the renting of a Shenzhen penthouse. The second charge alleges he proposed the interior designer of the flat to be considered for government honours and awards nomination.

The alleged offences occurred between November 2010 and January 2012. If convicted, Tsang could be jailed up to seven years.

Tsang was chief executive of the SAR from 2005 to 2012. He made his first court appearance at Eastern Magistracy (東區裁判法院) on October 5.

The 70-year-old showed up in his signature bow tie in burgundy red, with a matching lapel handkerchief peeping out of his black and white suit pocket.

He stood expressionless at the centre of the court as the two charges against him were read out in English. No plea was taken.

Tsang was released on bail of HK$100,000. He will have to give the court 24 hours’ notice if there are changes to his registered address. He may travel but has to tell ICAC his itinerary at least 24 hours before leaving Hong Kong. He was also told not to interfere with prosecution witnesses.

The case will be heard again on November 13.