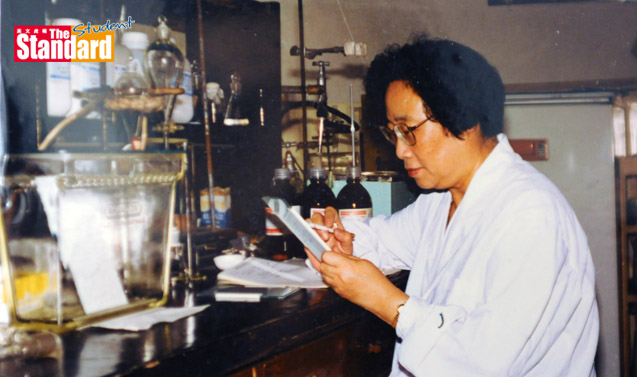 FOR decades, China has yearned for a Nobel prize (諾貝爾獎) in one of the sciences, and now a little-known researcher who helped isolate an anti-malaria medicine inspired by an ancient remedy has finally won that honour for her country.

Tu Youyou (屠呦呦), 84, one of three winners of the Nobel prize in physiology or medicine, also became the country’s first woman to win the prestigious award.

She received half the prize. The other half went to Satoshi Omura of Japan and Irish-born William Campbell for developing an anti-roundworm treatment.

Tu never achieved much public acclaim in China for her part in the early 1970s discovery, and never was accepted into the country’s prestigious National Academy of Science. But her breakthrough with the Nobel has drawn jubilant congratulations and drawn praise for the country’s medical research.

Tu appeared on state broadcaster CCTV (中央電視台) to say the award was a “great honour” while declining to take all of the credit for her work in discovering artemisinin (青蒿素) and dihydroartemisinin (雙氫青蒿素), extracted from sweet wormwood (黃花蒿).

“The successful finding of artemisinin is the collective achievement of the research team, and it is a collective honour for all Chinese scientists,” Tu said. “It indicates that the research science of the Chinese traditional medicine has won high attention from the international science community.”

Tu and her teammates combed through ancient medicine books, herbal therapies and folk remedies and later focused on sweet wormwood. They found that a compound extracted from the wormwood was effective in treating malaria.