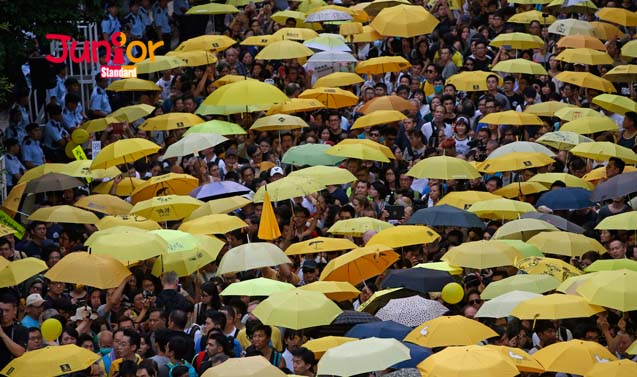 At 5.58pm, hundreds of people opened their yellow umbrellas on the footbridge outside the Central Government Offices and on Tim Mei Avenue.

That was the place where, a year ago, the police first fired tear gas bursts at crowds who ‘occupied’ Harcourt Road in Admiralty.

Police estimated that 920 people joined the protest at its peak period, while the organisers did not give a figure.

Joshua Wong Chi-fung (黃之鋒) of Scholarism (學民思潮) said: “We have to admit we returned without any achievement during last year’s Occupy Movement. So if you ask me, I don’t think 9/28 is a day worthy of any cel-ebrations.”

There was a tense moment when some protesters, including People Power (人民力量) member Tam Tak-chi (譚得志), stood face-to-face with officers at the intersection of Harcourt Road and Tim Mei Avenue.

Tam had said he would rush onto Harcourt Road and sit in the road, but gave up after an hour’s confrontation with the police for the people’s safety.

Occupy co-founder Benny Tai Yiu-ting (戴耀廷) said the movement was only a starting point for Hong Kong’s pursuit of democracy.