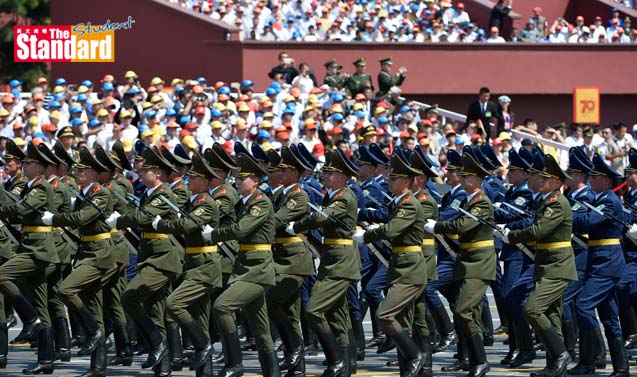 Xi’s pledge comes as China is trying to show it is a responsible international player amid concern over its growing military might and territorial disputes in the Asia-Pacific region (亞太地區).

During a state visit to Washington (華盛頓) a few days earlier, Xi agreed with US President Barack Obama (奧巴馬) that both countries would increase their “robust” peacekeeping commitments.

They are among leaders from more than 50 countries who pledged some 40,000 troops and police, as well as equipment or training for UN peacekeeping missions.

“China will join the new UN peacekeeping capability readiness system, and has thus decided to lead in setting up a permanent peacekeeping police squad and build a peacekeeping standby force of 8,000 troops,” Xi said.

He also said China would provide US$100m (HK$780m) in military assistance to the African Union (非洲聯盟) in the next five years to support the establishment of an African standby force and to boost its capacity for crisis response.

Xi said part of a new 10-year, US$1 billion China-UN peace and development fund set up by Beijing would be used for peacekeeping operations.

During his address to the General Assembly, Xi tried to allay concerns that his country’s growing influence was a threat.

“We are committed to peaceful development. No matter how the international landscape may evolve and how strong China may become, China will never pursue hegemony, expansion, or a sphere of influence,” he said.

The war against war – what is peacekeeping?
www.youtube.com/watch?v=40EihLq1aAo