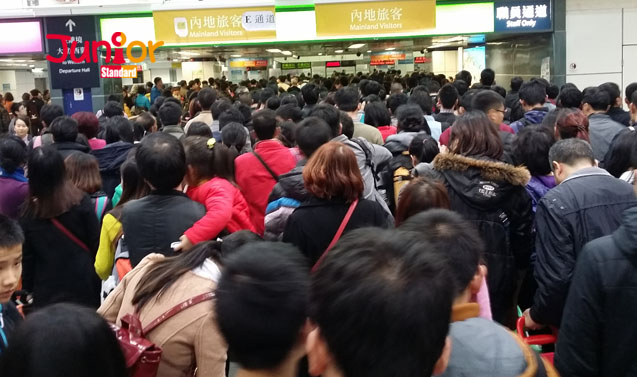 THOUSANDS of mainland shoppers and traders have flocked to Tuen Mun (屯門) and Sheung Shui (上水) to buy food and gifts ahead of Chinese New Year, with many saying Hong Kong products are cheaper than in the mainland. Shoppers spent about HK$1,000 on average on food, gifts and other goods.

At Lo Wu (羅湖) border checkpoint, the Immigration Department (入境事務處) recorded a 24 percent rise in mainlanders between 9am and noon on Sunday compared with the peak period last week. More than 20,000 mainlanders entered, an average of over 6,700 an hour. A department spokesman said 64 counters and 49 e-channels were opened during peak hours.

A staff member at Lung Fung Pharmaceutical in Sheung Shui said over the past two days mainlanders had bought food and goods for the Chinese New Year. “They bought snacks, nappies, formula milk, chocolate, cookies, cosmetics,” he said, adding that business at pharmacies increased 20 percent.