Reflections in a sea of yellow 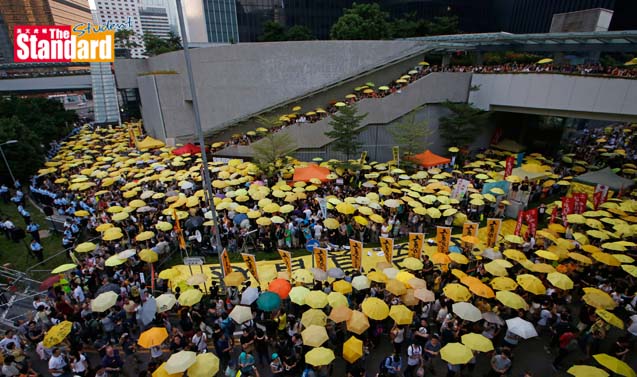 At 5.58pm on Monday, hundreds of people unfurled yellow umbrellas on the footbridge outside the Central Government Offices (政府總部) and on Tim Mei Avenue (添美道) to mark the moment a year ago when police fired the first of 87 tear gas bursts at crowds who occupied Harcourt Road (夏慤道) in Admiralty (金鐘).

Student leaders, the three Occupy co-founders, pan-democrats and pro-democracy celebrities Denise Ho Wan-see (何韻詩) and Anthony Wong Yiu-ming (黃耀明) observed 15 minutes of silence under the umbrellas in a day to reflect, not to celebrate.

Police estimated that 920 people joined the protest at its peak period, while the organiser did not give a figure.

Occupy leader Benny Tai Yiu-ting (戴耀廷) said the movement was only a starting point for Hong Kong’s pursuit of democracy.

Hongkongers need time to recover, and he is not expecting another occupation soon unless there were “unacceptable” situations such as pan-democrat legislators failing to secure enough seats to maintain their power of veto or Chief Executive Leung Chun-ying (梁振英) re-elected for a second term.

Political commentator Ivan Choy Chi-keung (蔡子強) said just like the 1 July protest, the turnout for the umbrella anniversary was smaller than expected.

“Some may be disappointed in the movement, or can’t see what action may be effective. There is also no immediate threat to spark mass movements now,” Choy said.