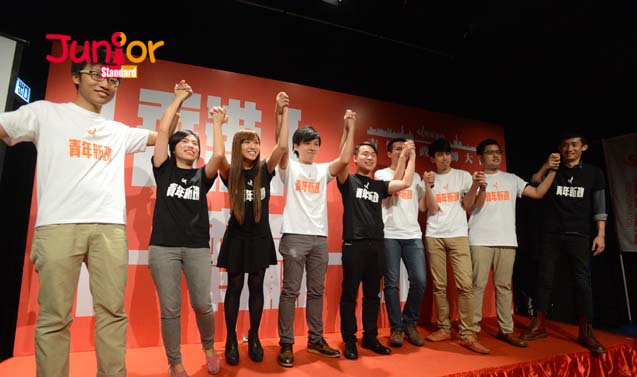 About 60 members of the group attended an oath-taking assembly (誓師大會) in west Kowloon yesterday.

They chanted “Hongkongers, let’s win this together”, its campaign slogan for the elections on 22 November.

Group convenor Baggio Leung Chung-hang (召集人梁頌恆) said they had about 140 members, most of whom are aged below 30.

Leung said he will not try to estimate how many of the group’s candidates stand a chance of winning against more experienced politicians.

“It depends on the people of Hong Kong,” he said.

“If the turnout reaches 50 percent, we will have a chance to win some seats, and if it hits 60 percent or more we can even have all nine candidates returned,” he said.

The 29-year-old student leader quit his job as a digital marketing manager a month ago to contest the Central and Western District Kwun Lung constituency. That seat has been held by veteran district councillor Ip Kwok-him (葉國謙) of the Democratic Alliance for the Betterment and Progress of Hong Kong (民建聯) for more than 10 years.