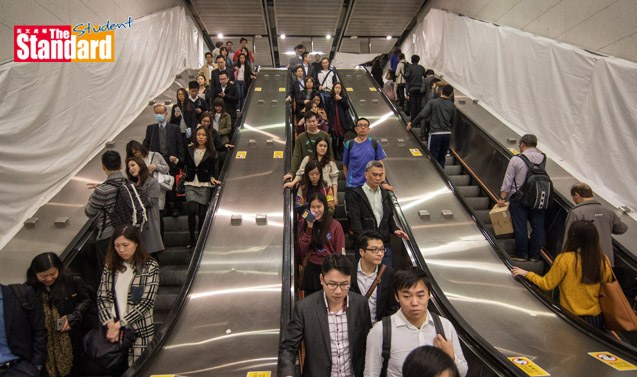 MTR Corp Limited (香港鐵路有限公司) is being urged to make its compensation procedures transparent, as complaints over station escalator accidents topped 380 in the first seven months of this year.

The Federation of Trade Unions (香港工會聯合會) said two passengers who were injured were denied compensation.

It said that from January to July this year, 382 complaints related to escalator accidents at MTR stations were recorded.

In one case, a woman surnamed Tong, 43, fell six or seven steps down an escalator in Tai Koo station (太古站) on 28 July after it suddenly stopped.

“The MTR staff did not immediately suspend usage of the escalator and still allowed passengers to walk past me, which added to my injuries,” Tong said.

Although she got a medical report, Tong said compensation was rejected because she was told the accident was not caused by company negligence. Tong said she still cannot work because of her leg injuries.

She said she will decide whether to seek legal recourse when she receives results from an internal investigation that the MTRC said was ongoing.

In another case, a 71-year-old woman fell at least 10 steps backwards on a rising escalator in Tai Koo station two years ago when another passenger fell on her from a few steps above.

She was injured but her request for compensation was rejected.

FTU lawmaker Aron Kwok Wai-keung (郭偉強) said: “The MTRC should make its compensation system details transparent for passengers to understand whether their rights and safety are well protected.”

An MTRC spokesman said the company has bought third party liability insurance and will compensate accidents that are related to the company’s mismanagement.