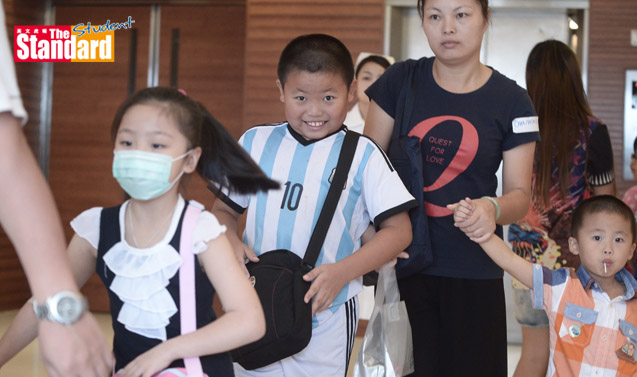 EIGHT children from public housing estates who drank water with excessive lead were confirmed by assessments to have suffered developmental delays.

Secretary for Food and Health (食物及衛生局局長) Ko Wingman (高永文) did not spell out the kinds of delays.

“We will make personal arrangements for the children, medically and clinically, depending on the developmental problems they face,” Ko said.

“Everyone faces different problems. It could be their physical or verbal abilities.”

Health authorities have so far assessed 106 children on their physical and intellectual abilities. Another 27 need further assessment. Authorities will ensure the children receive the care they need, Ko said.

Ada, whose seven-year-old son is believed to have delayed development, criticised the government for being unhelpful.

“My son went through basic governmental health checks before and was assessed as normal, but now they say he is half a year slower than kids his age,” she said.

“He has difficulties in differentiating between capital and lower case letters.”

The boy, who lived in Kai Ching Estate (啟晴邨) for two years, was tested with 6.7 micrograms of lead per 100ml of blood, exceeding the healthy limit of five micrograms suggested by the World Health Organisation (WHO, 世界衞生組織).

The authorities have begun testing tap water in more than 900 kindergartens after drinking water at some schools was found to have lead levels above WHO safety standards.

Preventing furt...
THE reason why Tang Kwai-sze i...