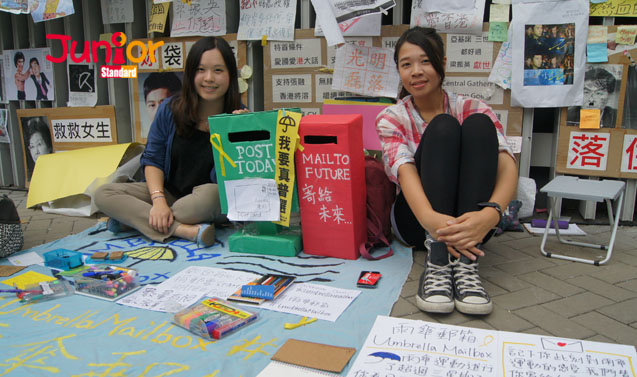 THE younger generation has been called strawberries – meaning they look good on the outside but are mushy inside. But they have shown themselves not to be mushy; they proved themselves to be the backbone of the Occupy Movement late last year. On issues close to their heart, our young people can certainly be strong and resourceful. But is society doing its best to nurture them?

Protest motivation
THE government thought the recent street protests were about jobs and money. The chance for moving up in life – our policy-makers said – was the real reason (or at least a large part of it) why Hong Kong youth were up in arms.

Chief Executive Leung Chun-ying (梁振英) linked the actions with poverty. He announced at a recent Commission on Poverty (扶貧委員會) meeting the setting up of a task force to review youth policy. He wanted to promote upward mobility of young people in the grassroots level through education, employment and job training.

But some said Leung had gotten the wrong end of the stick, and suspected this concern for youth welfare to be a ploy to divert attention from the real political issue.

Nurturing youth
LIKE many countries, Hong Kong has specific policies to nurture the younger generation. The current government’s stated objective is to “foster a culture of multi-faceted excellence and help nurture young people through education, employment and whole-person development”.

Young people, meanwhile, are expected to develop a positive approach to life and a sense of social awareness. They should also take an interest in the development of Hong Kong and our country and cultivate an international vision, and attach importance to both individual rights and social obligations, according to the objective.

Its present policy objectives:
• to promote positive values among young people;
• to enhance their understanding of Chinese culture and heritage;
• to encourage their participation in voluntary and community work;
• to broaden their international perspective;
• to promote leadership training among them.


Are these the right priorities? Some of the public projects aimed at helping young people do not appear to be doing too well.

For example, youths said the Youth Square in Chai Wan (柴灣) that was opened “to facilitate youth development activities” has become a white elephant. Its facilities include a theatre, studio, multi-purpose area, hostel, retail shops and offices. But the usage rate has not been satisfactory.

Also, the Youth Hostel Scheme is designed to provide a few thousand units to relieve housing pressure for young people on a short term basis. But a lawmaker pointed out the scheme was not helpful due to stringent admission criteria and complicated formalities.

Fact Box
Commission on Youth
(青年事務委員會)
It is the main body that advises the government on youth matters. Its vision is “to consolidate community efforts to assist in formulating and implementing youth development programmes and activities”.

31,000
This is the number of jobless youths in the second quarter of 2013 – two to five times more than the overall population, according to a study by the Hong Kong Federation of Youth Groups (香港青年協會).

Wealth gap
A study by the Hong Kong Ideas Centre in 2012 found over 90 percent of post- 90s agreed or strongly agreed that “the disparity between the rich and the poor in Hong Kong is wider and wider”.