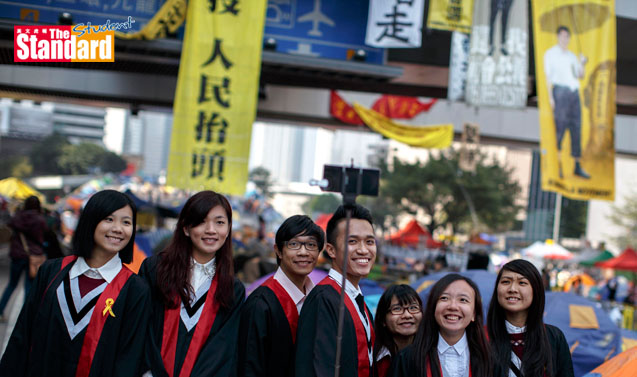 The youth of Hong Kong captured the world’s attention last year as the driving force behind the recent Occupy Movement demonstrations. That action was to fight for true universal suffrage, but the government also saw it as an expression of the general frustration of young people. How do local youth fare? Does our youth policy meet their needs?

STUDENT leaders had key roles in the Occupy Movement. They were featured prominently in the international press, and have shown the world their true colours – courage and determination in challenging the authorities on the pace of the territory’s democratic development.

The protesters they led, many of them also young people, braved rain and wind, the wrath of a substantial sector of the community and the stern face of the law to fight for what they believed was right.

Some of their actions might be seen as radical, but they succeeded in getting the attention of the powers-that-be and publicising their aspirations.

As the dust settles over the streets, our community leaders should consider how to channel and focus the passion and energy of our young people towards the long-term growth of Hong Kong.

Youth policies
TO make sure that today’s young people become competent leaders in the future, we need to give them the best opportunities, and this calls for sound youth policies.

According to the United Nations, youth policies should define the role of young people in the macro development plan of a nation.

They should comprehensively spell out the rights and responsibilities of young people, set out goals and timelines, while taking into account young people’s needs, and providing ways for them to get involved.

Poverty relief and upward mobility
IN the wake of the street actions, Chief Executive Leung Chun-ying announced the establishment of a task force under the Commission on Poverty to formulate new measures to help the city’s youth.

He said the events that took place in the past months highlighted the need to review Hong Kong’s youth policies, which cover a multitude of issues including education and training, employment opportunities as well as the chance of upward mobility.

Upward mobility for youth was also on the agenda of former Chief Executive Tung Chee-hwa and former Financial Secretary Antony Leung Kam-chung. But they seemed to put emphasis, some said unduly so, on enabling young people to buy their own homes.

A wrong diagnosis?
PUTTING the occupying action in the context of poverty relief, however, appeared to suggest that young people were merely acting out because they are not happy with their lot, and it has created a controversy.

People questioned whether it is accurate to say that the young activists were only fighting to have better jobs, the chance to make more money, owning their own home and having a better material life.

Some said Leung’s ‘diagnosis’ of youth policies was plainly misguided.

Lawmaker Frederick Fung Kin-kee, also a member of the Commission on Poverty, said there was no evidence to suggest young people who took part in the protests were poverty-stricken, nor had they put demands for jobs or affordable housing on their placards.

However, some international media did report “stale wage levels, high property prices and business cronyism” as some of the frustrations of the protesters in the occupying action.

Conclusion
The new youth measures promised by Leung have yet to be drawn up, so we do not know whether or not they will address the real concerns of young people.

But many of the existing youth initiatives do not seem to be achieving their desired objectives. For example, a range of government measures to help aspiring young entrepreneurs start their own businesses did not produce many successful cases.

Is it because these measures were ineffective, or because our young people lack the necessary skills and networks? These are questions that need to be answered.

It is always a good thing to care about the plight of the younger generation and provide them with the best possible opportunities so that they may realise their full potential.

But correctly identifying the needs and aspirations of young people is essential to getting youth policies right.

Youth initiatives: are they working?
Youth Square
The HK$800 million facility started to open in phases in 2009, to offer a central venue for activities and events to nurture young people, but it has been widely underutilised.

Youth Hostel Scheme
Implementation of the Youth Hostel Scheme, designed to provide temporary housing for needy young people to stay for up to five years to gain a footing in life, has been sluggish. Only a small portion of the promised 1,000 units have so far been completed. The requirement that residents give up public housing applications renders the scheme rather unattractive.

Youth parties
In the past two years, the government has invited popular Korean stars to perform at 1 July handover anniversary shows. But are these really necessary? Recently, it was suggested that the government should hold dance parties for young people, but the idea immediately attracted criticism.