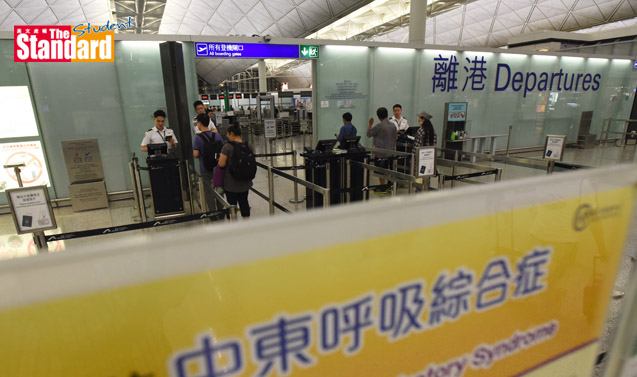 EXPERTS are worried by South Korea’s (南韓 ) first third-generation cases of Mers – people who caught the virus from someone infected by a primary source.

Scientists in Hong Kong who battled the 2003 outbreak of Sars, from the same family of coronavirus as the present Middle East Respiratory Syndrome (Mers, 中東呼吸綜合症), said the South Korean outbreak is the worst so far involving a traveller-carrier.

The Korean toll by Tuesday night stood at two deaths and three people in critical condition from 25 infections.

It first jumped from camels to humans in the Middle East, and the South Korean super-spreader was a 68-year-old man who visited Bahrain (巴林) on 18 April to discuss an agricultural project.

He went home on 4 May and showed Mers symptoms seven days later.

One of the secondary cases, a 40-year-old man who contracted the virus when in the same hospital ward as the index case in mid-

May, went on to infect two other men, aged 73 and 78, when he sought treatment at another hospital a few days before May’s end.

But the 40-year-old man was not diagnosed with Mers until Sunday.

Third-generation infection “is a kind of person-to-person-to-person type of transmission”, said Malik Peiris, a professor of virology and director of the School of Public Health (公共.生學院) at the University of Hong Kong (香港大學).

“It’s not the first time it’s happened. Last year’s big outbreak in Jeddah (吉達), Saudi Arabia (沙特阿拉伯), comprised several generations. But it is the first time it has happened with an imported case outside of the Arabian peninsula. The size of the [Korean] cluster is unprecedented.”

It is important, he said, to genetically analyse the virus to see if it has mutated. On that, HKU scientists have offered to help South Korean authorities with genetic sequencing.