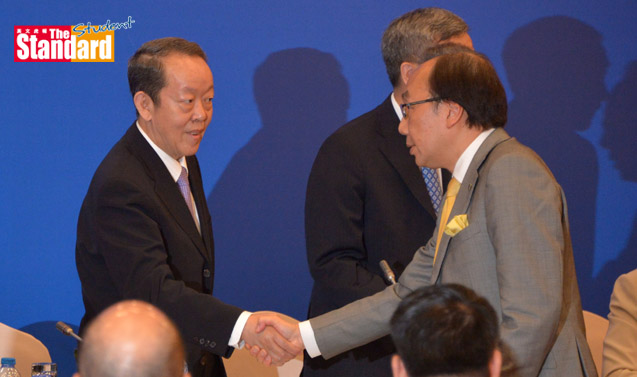 The Democratic Party’s (民主黨) Wu Chi-wai (胡志偉) said on Monday that claims by Beijing officials that how he and his fellow pan-democratic lawmakers went in an upcoming vote on the government’s reform package would show whether they support the principle of “one country, two systems” only serves to radicalise their parties.

Wang described most pan-democrats as friends who agreed with the principles underlying “one country, two systems”, the constitution as well as the Basic Law. But he said there is a minority who think Hong Kong is an independent political regime that can challenge the Communist Party (共產黨).

Li said how lawmakers vote will be a litmus test of whether to support or oppose “one country, two systems” and the mini-constitution.

Wu said, “With this logic, the officials’ remarks meant even if you are a moderate pan-democrat, you will still become the target of a Beijing crackdown if you vote against the reform proposal. It will further tear Hong Kong society apart.”

The Civic Party’s (公民黨) Ronny Tong Ka-wah (湯家驊) said, “For the medium and short-term interests of Hong Kong, it will be more conducive to Hong Kong for the reform to be voted down.”

Executive Council (行政會議) member Cheng Yiu-tong (鄭耀棠) likened the pan-democrats to a “cooked duck” with its hard beak, meaning they were firm only in words, not actions.