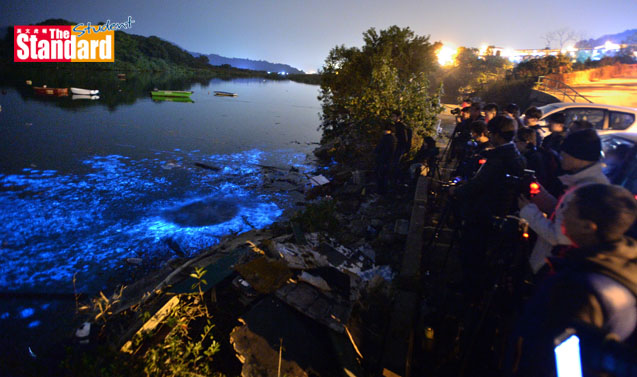 ENVIRONMENTAL groups and residents have expressed concern after droves of sightseers flocked to Tai Po (大埔) in the past few days, hoping to catch a glimpse of the fluorescent blue patches of water known as ‘sea sparkle’.

Experts said the algae causing the stunning blue glow along the Tai Po shore is a byproduct of marine pollution.

People have gathered in Sam Mun Tsai (三門仔) to witness the eerie spectacle in the evenings, where vast stretches of shoreline are illuminated by the neon blue light from the algae.

This has upset locals who complained about noise and lost stones. Some visitors and photographers have thrown rocks into the water to stimulate the blue glow.

A villager said the rocks thrown away would normally be used as a breakwater to reduce the intensity of waves, and now residents have to find other rocks to rebuild the structures.

Village representative Shek Kwong-yin (石廣燕 ) said most of the visitors flocked to the area around midnight, which causes a lot of noise. Other complaints have included the blockage of roads in and out of the area, caused by the visitors’ cars.

“You could create waves by touching the water with a branch to make the algae glow ... definitely don’t throw rocks,” he said.

Referring to the cause of the Noctiluca scintillans algal bloom, to give its proper scientific name, Law said, “Dumping chemicals into the water will definitely affect the environment.”

Rather, it belongs in the same category as red tides.

Members of the HK Wildlife.net (香港自然生態論壇) forum have also expressed their worries about people throwing rocks into the water, which could harm marine life.