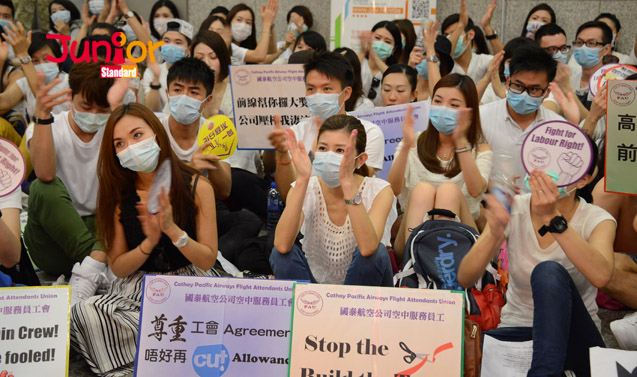 CATHAY Pacific Airways (國泰航空) flight attendants have put on hold preparations for a strike after the airline agreed to their pay and benefits demands.

Cathay Pacific Flight Attendants Union (國泰空中服務員工會) chairwoman Dora Lai Yuk-sim (黎玉嬋) said the two parties signed a memorandum of understanding last Thursday following a two-day meeting, and that if the formal agreement can be inked on Monday, all strike preparations will be halted. Asked if the union had won the battle, Lai said, “We only managed to get back what belonged to us.”

Negotiations went on a rollercoaster ride. In front of about 150 supporters, teary unionists in the afternoon described the discussion as ‘disgusting’. At one point, they announced the talks had collapsed and that they would press ahead with the strike in August.

Earlier, flight attendants won a small victory after management agreed to reinstate a legal protection clause that relates to dealing with unruly passengers, satisfying one of their three demands. The remaining two demands concern pay and a meal allowance.

Flight attendants are offered a permanent contract after they finish a three-year training course. Those who signed a permanent contract before 2 April received a pay rise of HK$32.10 to HK$176.80 per hour of flight. Those who signed it after 16 April will get a much smaller hike of HK$14.60 per hour of flight. There should be a uniform allowance rise to HK$176.80 for all, they argue.

The flight attendants wanted the company to reverse a reduction to the lunch allowance in Melbourne (墨爾本), which was chopped almost in half to A$35 (HK$207.44) from A$60.