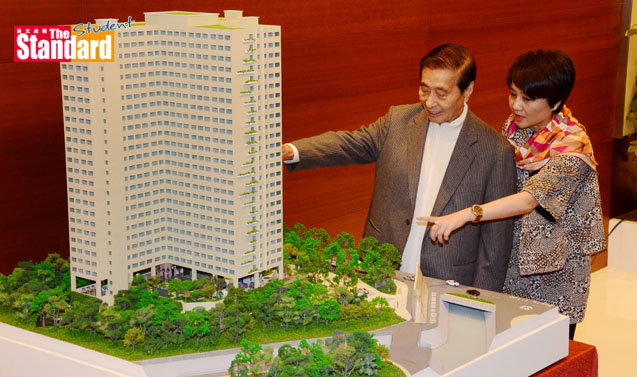 The elderly would be able to secure new flats for as little as HK$100,000 just over the border in Guangdong (廣東), while the tycoon wants to build apartments costing just HK$1 million for young adults in Hong Kong.

Lee said local housing prices are about to peak, though the market is unlikely to collapse even if interest rates go up.

To help resolve the SAR’s housing problems, Lee wants to join hands with Country Garden (碧桂園) chairman Yang Guoqiang (楊國強 ) to provide 10,000 flats for seniors in either the Nansha (南沙) district of Guangzhou (廣州) or Huizhou (惠州) city, both of which are less than two hours’ drive from Hong Kong.

“Construction costs in the mainland are about a tenth of that in Hong Kong, which means for every unit built here, we can build 10 in the mainland,” Lee said.

Lee said people will have a better chance moving into a flat of their own under his proposed programme than by applying for public housing.

“What’s the point of fighting so hard for one quota?” said Lee, referring to the overwhelming response to the Housing Authority’s (房屋委員會 ) latest batch of subsidised flats coming on the market in 2016.

Lee said his top priority is to help the young. He raised the possibility of building 5,000 flats at Tai Hang Sai Estate (大坑西.) in Shek Kip Mei (石硤尾) for employed local youths. The project is named ‘housing for entrepreneurial, hard-working youths’.

At about HK$1 million each, the units will not require any down payment. Buyers could choose to pay HK$9,600 monthly at a fixed three percent interest rate for 10 years or they could pay HK$5,500 per month for 20 years.

“I hope every young person can become a millionaire by owning an affordable home, so that Hong Kong will be a paradise,” said Lee.

However, such homes would not be allowed to be sold in the secondary market.