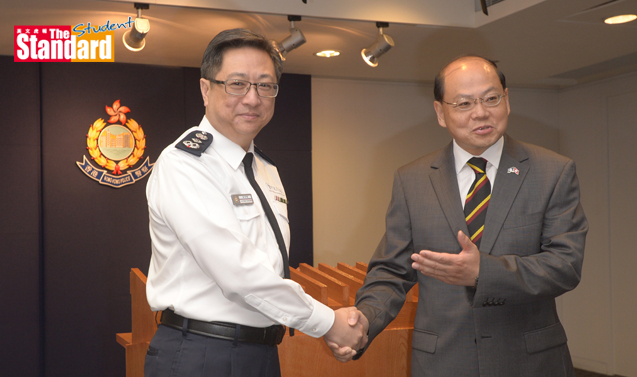 THE new police commissioner has promised to improve ties and enhance communication between the force and the public.

Stephen Lo Wai-chung (盧偉聰), 53, whom netizens christened “The Monitor” (班長) because he had been a class monitor in secondary school, succeeded Andy Tsang Wai-hung (曾偉雄), whom activists called the “Bald Hawk” (禿鷹) for his heavy-handed approach to Occupy Movement protesters last year.

On his first day as chief, Lo said, “My colleagues and I will continue to be politically impartial and fair. I hope to enhance the force’s communication with the public and explain more about the reasons behind police operations.”

When asked if police will apologise if they do something wrong, Lo said, “Commissioner Tsang has his style and I have my own. It’s hard to answer a hypothetical question, but I will do something if it is necessary.”

Lo said so far there are no signs of a return of the Occupy Movement, but a “high-risk” period would be before the Legislative Council (立法會) votes on the political reform proposal late next month.

His priorities are combating terrorism and cybercrime.

Asked about reports that three suspects in the alleged assaults on three TVB (電視廣播 ) and RTHK (香港電台) reporters by anti-Occupy protesters in Tsim Sha Tsui (尖沙咀) had asked to wear shower caps and masks during an identification parade, Lo said suspects do have that right and it is up to the chief inspector’s discretion to approve the request.

The Department of Justice (律政司) decided not to prosecute, but Lo said police are continuing their investigation.

And a good way for Lo to start, Yeung added, is if he discloses the review report on the use of force during the Occupy Movement.