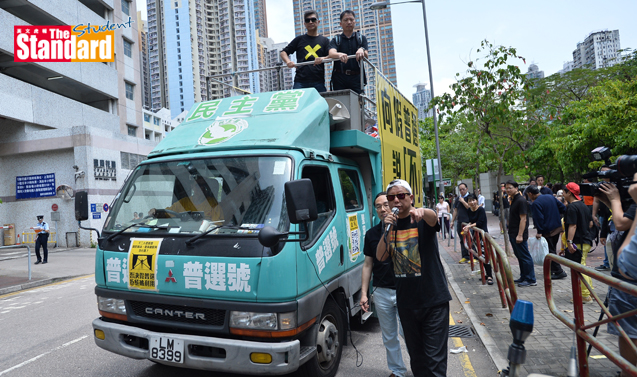 ABOUT 20 pan-democratic lawmakers launched a campaign against the political reform proposal on a converted open-top lorry.

The lead truck and 10 other cars began the five-hour journey from Tai Kok Tsui (大角咀) at about 11am on Monday, before driving to Mong Kok (旺角), Sham Shui Po (深水.) and Tsuen Wan (荃灣).

At each of the three districts they disembarked to distribute pamphlets and sometimes used loudhailers.

One person was seen tearing up the leaflets in Tsuen Wan while a woman held up a bitter melon, mocking them that “Hong Kong’s democracy will be doomed if it relies on pan-democrats’ efforts”.

Another complained the lawmakers were too noisy.

The Labour Party’s Lee Cheuk-yan (李卓人) used a loudhailer while standing through the sun roof of a seven-seater vehicle in Mong Kok.

“We have also found that some citizens don’t have a clear understanding of the reform proposal. We are trying to explain to them that the proposal cannot live up to the spirit of universal suffrage.”

The Civic Party’s Kwok Ka-ki (郭家麒) said the pan-democrats are willing to disembark from the vehicles to approach people directly, unlike the bus parade of Chief Secretary Carrie Lam Cheng Yuet-ngor (林鄭月娥) and other officials last month. Lam and other officials decided not to get off an open-top bus on 25 April after protesters tried to stop the vehicle.

Civic Party leader Alan Leong Kah-kit (梁家傑) said amid a large-scale government promotional campaign, the pan-democrats need to explain to people why they are opposed to the proposal.