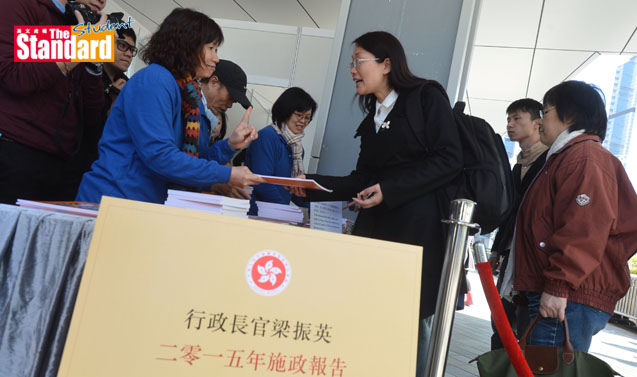 Chief Executive Leung Chun-ying has delivered his third policy address, in which housing, population, youth and education were the main issues. Some of these are responses to current affairs, while others concern our long-term interests

Population and housing
Handle the long-term challenges
AGEING is affecting Hong Kong’s long-term development. Due to the decreasing birth rate, the government projects that the proportion of the population older than 65 will increase to 32 percent by 2041, from the current 15.5 percent. Subsequently, the labour force will decline and economic growth will slow down. It is a huge challenge confronting contemporary youth.

The government plans to tackle the issue by unleashing the potential of the local labour force, nurturing local manpower and recruiting talent from outside Hong Kong. For example, the retirement age of civil servants will be extended to 65 and other employers are encouraged to do the same. An initiative was introduced in Chief Executive Leung Chun-ying’s (梁振英) policy address (施政報告) to attract second-generation emigrants, allowing them to stay in the city for one year to look for work. The arrangements for overseas talents working in the city will also be relaxed. For the elderly, HK$50 billion will be earmarked in the coming budget for the poorest.

Despite the expected shortage of appropriate labour force, there is still a huge demand for housing in the current market. Leung announced that the next five years will see 30 percent more private homes built annually, as well as untried models to provide subsidised flats.

Education
Know more about China
THE government has accelerated the adjustment of education after last autumn’s student-led Occupy Movement and the setback in introducing moral and national education (德育及國民教育科) in 2012. Leung’s latest policy address indicates that he is planning to promote students’ knowledge about China during the rest of his tenure.

The government will boost funding by HK$228 million, to be spent on Hong Kong students and teachers forging closer ties with their mainland counterparts over the next three years. The number of local primary and secondary schools with mainland sister schools will be doubled from 300 to 600. The government also aims to double subsidies for pupils to join mainland programmes at least once in primary school and once in secondary school.

The curriculums of Chinese history and world history will be improved. Government sources say the idea of adding Chinese modern and Hong Kong history to the curriculum is being studied, as well as doubling class hours for junior secondary students. However, it is not known how the Education Bureau (教育局) will balance the accompanying increasing burden of coursework.

Youth
Address fears over the future
YOUTH, for the first time, has become part of a section’s headline in the policy address. This shows that the government is trying to appease the resentment among the young shown in recent protests by investing more in them and relieving their pressure.

The spotlight has fallen on a Youth Development Fund (青年發展基金) seeded with HK$300 million, aiming to assist young entrepreneurs. The proposed grant for each start-up project will range from HK$100,000 to HK$300,000. Even if a business fails, the money will not have to be repaid. Money and the youngsters’ innovation and passion are definitely crucial to starting a business, but those resources are far from enough to run a profitable business sustainably. The applicants are required to apply for funding through non-governmental organisations (NGOs) that will monitor and review their performance and provide mentors if necessary.

Other youth policies include implementing four youth hostel projects, and a new volunteer programme under the United Nations in Southeast Asian countries. Meanwhile, seven University Grants Committee-funded community colleges are to be asked to lower tuition fees because of their large financial surpluses.

Innovation
Boost economic restructuring
THE government has been talking since the handover about restructuring the economy to become more high-tech-oriented. But it seems that none of the three chief executives has delivered on that promise yet. This year, new policies to promote information technology, Chinese medicine and other high-tech industries have been introduced.

An initiative highlighted this year is to build a ‘Smart City’ in the future core business district of Kowloon East. The government is planning to use new technologies to enhance pedestrian and vehicular accessibility and manage the district’s facilities. Towards this goal, there is likely to be free Wi-Fi in the area soon. Leung also proposes to inject HK$5 billion into the Innovation and Technology Fund (創新及科技基金), which has already provided HK$8.9 billion for more than 4, 200 projects.

Meanwhile, the government is going to develop a testing centre for Chinese medicine, formulating more Hong Kong Chinese Materia Medica standards. Chinese medicines decoction pieces will for the first time have standards throughout the world.

However, a more dynamic economic landscape will not be seen overnight.