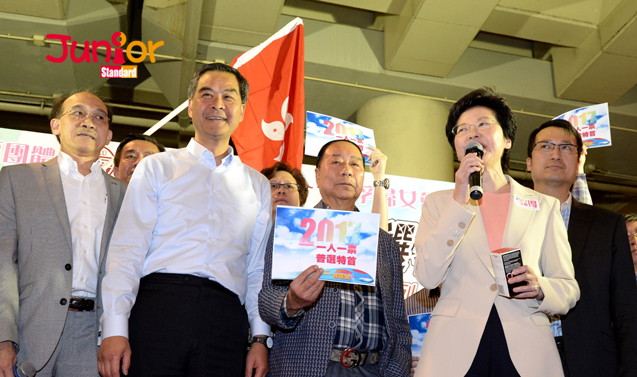 CHIEF Secretary for Administration (政務司司長) Carrie Lam Cheng Yuet-ngor (林鄭月娥) insists the final blueprint to make universal suffrage happen in 2017 is competitive and will give pan-demo-crats a fighting chance.

The political reform package she unveiled last Wednesday proposes a lower threshold for recommending nominees and no limit for endorsing candidates who will officially run in a one-man, one-vote ballot for the Chief Executive position.

But pan-democrats, who staged a walk-out after Lam delivered her speech, said they will veto the proposal because selecting candidates through the ‘small circle’ 1,200-member Nominating Committee is not genuine universal suffrage.

Lam said two elements – potential candidates needing only the recommendation of 120 members of the committee in the initial stage, and members being able to endorse as many candidates as they want in the nomination stage – make the package more competitive.

To qualify as a final candidate, nominees have to obtain more than half or at least 601 votes from the Nominating Committee. If more than three or less than two obtain the 601 nominations, this will be left to local legislation to deal with. In the voting stage, five million people are eligible to cast a ballot.

Lam said 130,000 written submissions were made during the second-round consultations from January to March and 88 consultative sessions and district activities were held.