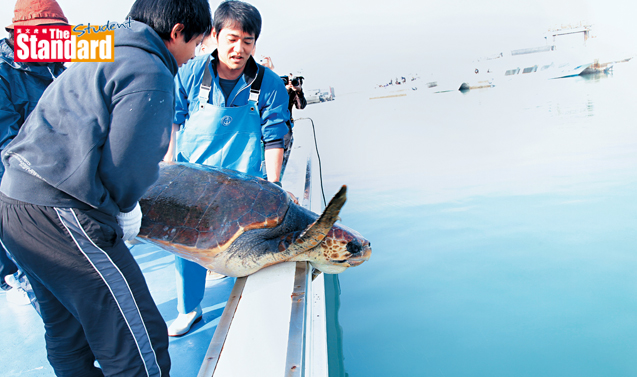 ECONOMIC output by the world’s oceans is worth US$2.5 trillion (HK$19.5 trillion) a year, rivalling nations such as Britain (英國) or Brazil (巴西), but marine wealth is sinking fast because of overfishing, pollution and climate change, according to a study.

“The deterioration of the oceans has never been so fast as in the last decades,” Marco Lambertini, director general of the WWF International (世界自然基金會) conservation group, said.

Ocean output, judged as a nation, would rank seventh behind the gross domestic product of Britain and just ahead of Brazil’s on a list led by the United States and China, the study said.

The report, Reviving the Oceans Economy: The Case for Action – 2015, by WWF, the Global Change Institute (全球變遷研究所 ) at Queensland University (昆士蘭大學) in Australia (澳洲) and the Boston Consulting Group (波士頓諮詢公司), estimated that annual “gross marine product” (GMP) was currently worth US$2.5 trillion.

That included fisheries, coastal tourism, shipping lanes and the fact that the oceans absorb carbon dioxide from the air, helping to slow global warming. The study did not estimate the rate of decline in GMP.

Lambertini said the report aimed to put pressure on governments to act by casting the environment in economic terms and was a shift for the WWF beyond stressing threats to creatures such as turtles or whales.

“It is not just about wildlife, pretty animals. It is about us,” he said.

The report, for example, values carbon dioxide absorbed from the air at US$39 per tonne, drawing on estimates by the US Environmental Protection Agency (美國國家環境保護局) to judge damage from warming such as more flooding or risks to human health.

The study estimated that total ocean assets, such as coral reefs, mangroves, shipping lanes and carbon absorption, were worth a total of US$24 trillion, about 10 times the annual output.

Lambertini said UN sustainable development goals for 2030, due to be set in September, could help the oceans recover if properly implemented.