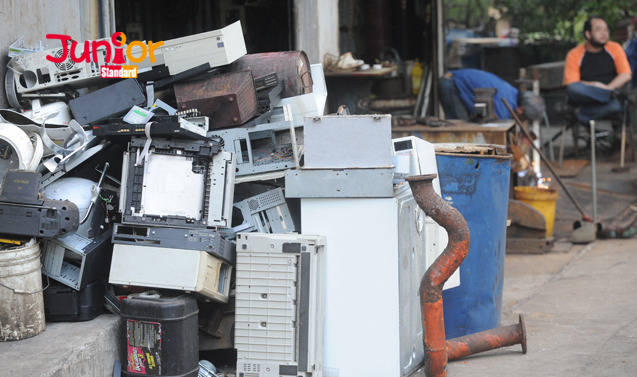 THE United States (美國 ) and China contributed most to record mountains of electronic waste such as mobile phones, hair dryers and fridges in 2014 and less than a sixth ended up recycled world-wide, a United Nations (UN, 聯合國) study said on Sunday. Overall, 41.8 million tons of ‘e-waste’ – defined as any device with an electric cord or battery – were dumped around the globe in 2014 and only an esti-mated 6.5 million tons were taken for recy-cling, the United Nations University (UNU, 聯合國大學) in Tokyo (東京), Japan (日本) said.

The report estimated that the discarded materials, including gold, silver, iron and copper, was worth US$52 billion (HK$402 billion).The US led e-waste dumping with 7.1 million tons in 2014, ahead of China on 6.0 million and followed by Japan, Germany (德國) and India (印度), it said.

The US, where individual states run e-waste laws, reported collection of 1 million tons for 2012 while China said it collected 1.3 million tons of equipment, such as TVs, refrigerators and laptops, in 2013.

Norway (挪威) led per capita waste generation, with 28kg dumped per inhabitant, followed by Switzerland (瑞士), Iceland (冰島), Denmark (丹麥) and Britain (英國). On that ranking, the US was ninth and China was not among the top 40 in the list.