HK gets under 7 hours sleep 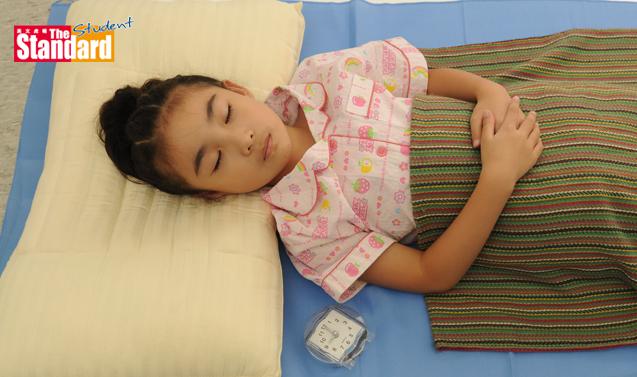 MOST Hong Kong people are in bed before 1am and awake by 8am. But many may not sleep for as long or as well as doctors recommend.

Still, Hong Kong ranked 17th in the global survey about sleep quality on a list compiled by smartphone app Sleep Cycle (睡眠周期管理應用程式), with people in bed at 12.55am on average and waking at 7.57am.

Within that period they get six hours and 39 minutes of quality sleep.

Mainlanders have better sleep and rank second on the list, bedding down at 12.32am and rising at 7.42am.

The Taiwanese (台灣人) are the second-best Asians (亞洲人), after mainlanders, at No 7.

The app tracks people as they slumber but wakes them from light sleep, which is said to make them feel more naturally rested. That is done on a phone’s accelerometer tool, which follows movements.

Sleep Cycle had more than two million users when gathering data from 1 June last year to 31 March. That led to a programme taking in 941,329 people aged 18 to 55 in 47 countries.

“You go through a cycle of sleep phases,” a spokesman said. “The first phase is light sleep followed by deep sleep and a dream state referred to as REM sleep. A full sleep cycle lasts about 90 minutes and is normally repeated several times each night.”

The best sleep is when the 90-minute cycle is repeated throughout the night, according to the app’s Swedish (瑞典人) founders.

The study also led to findings such as people in 58 percent of countries experiencing the best sleep quality on Wednesdays.

Predictably, a majority (71 percent) of the world wakes in the best mood on a Saturday. It is also the day people wake later than other days.

The world wakes up the earliest on Mondays.

The National Sleep Foundation (國家睡眠基金會) in the United States recommends seven to nine hours of sleep for people aged from 18 to 65.