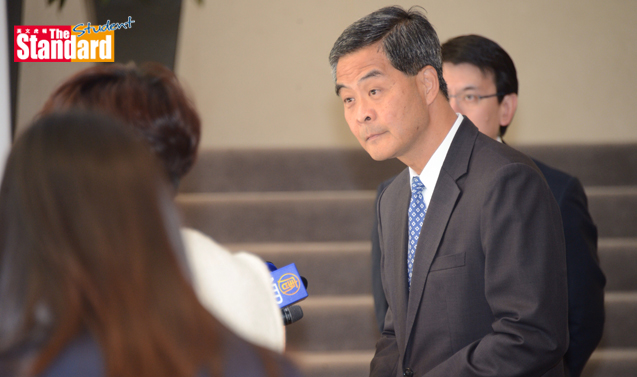 CHIEF Executive (行政長官) Leung Chung-ying (梁振英) expressed confidence that the government’s political reform package to be tabled in the Legislative Council (立法會) on Wednesday will be passed.

Leung was asked last week if it were true the government, according to sources, would target 13 or 14 votes from the 27-person pan-democratic camp. That figure is more than the required number of four extra votes needed for the reform to be passed by a two-thirds majority of the 70 legislators.

The government will propose that candidates for the 2017 chief executive election only need to obtain 120 Nominating Committee (提名委員會) members’ recommendations instead of 150 in the first stage, a move largely seen as a compromise.

The recommendations will be capped at 240 to prevent any one candidate from gaining overwhelming support and limiting the chances of others in the initial stage.

Televised debate sessions will also be held among candidates.

In the next stage, the candidates have to obtain more than half of the Nominating Committee members’ nominations, or 601 votes, to become official candidates.

Each of the members will separately indicate whether they will or will not vote for each candidate in a secret ballot.

It is expected that each candidate will find such an arrangement to be more favourable in obtaining the support of committee members.

The two – or possibly three – leading candidates will then face off in the 2017 chief executive elections in a one-man, one-vote process.

Under the proposal, the candidate who obtains the highest number of votes from some five million of the electorate will be declared the next chief executive.

The winner does not have to clinch more than half of the votes. Blank ballots will be regarded as invalid votes.

Sources also said the government has not ruled out Beijing officials holding meetings with some pan-democrats to gain their support.