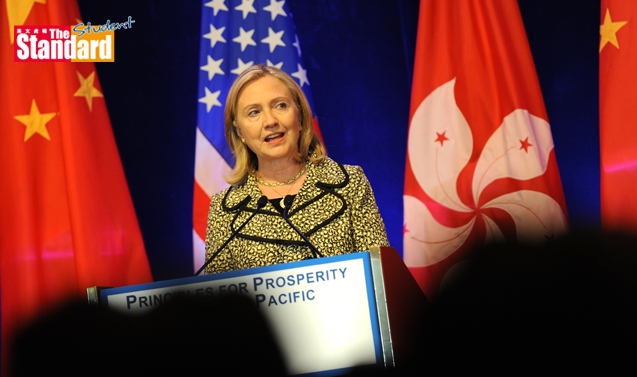 HILLARY Clinton (希拉莉) cast herself as a champion for everyday US citizens, kicking off her long-awaited second run for the White House (白宮) with a vow to fight for a level playing field for those recovering from tough economic times.

Clinton, who begins the 2016 presidential race as the commanding Democratic (民主黨) front-runner, entered the fray with a flurry of video, email and social media announcements that indicate she has absorbed some of the lessons of her painful 2008 loss and will not take anything for granted this time.

When she lost the Democratic nominating battle to Barack Obama (奧巴馬), her campaign was heavily criticised for conveying a sense of arrogance and entitlement, and for being out of touch with the party’s progressive wing.

This time, the video launching her campaign portrayed her as a warmer, more empathetic figure and laid the groundwork for a more populist economic agenda.

Eight years ago, her launch message was “I’m in it to win.”

On Sunday, the wife of former president Bill Clinton (比爾．克林頓 ) shifted the attention to voters, declaring on her new website, “Everyday Americans need a champion. I want to be that champion.”

This was in contrast to her last campaign that was seen as less adept than Obama’s at using technology to convey messages.

In a tweet on Sunday night, Clinton said, “Road trip! Loaded the van and set off for IA.”

A campaign aide said Clinton left her home in Chappaqua (查帕闊), New York (紐約), for the drive to Iowa, where she will attend her first campaign events this week. In the tweet from a stop in Pennsylvania (賓夕凡尼亞州), Clinton said, “Met a great family when we stopped this afternoon. Many more to come.”

But showing a more down-to-earth side while connecting with ordinary voters will be a challenge for Clinton, one of the most famous figures in the United States after decades as the wife of former President Bill Clinton, a US senator and secretary of state.