US and Cuban presidents meet 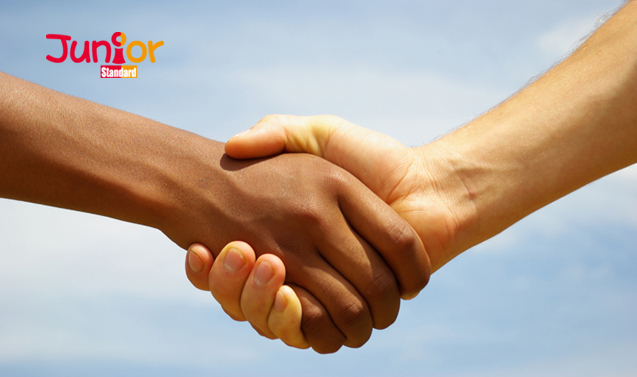 TWO countries that have been enemies for over half a century are now trying to make friends with each other again!

US (美國) President Barack Obama (奧巴馬) met Cuban (古巴的) President Raul Castro (勞爾) on Saturday in the highest-level talks between the two countries in nearly 60 years, and the two men agreed to push ahead on improving relations after decades of hostility.

Describing their private meeting as “historic”, Obama said the two countries can end the antagonism of the Cold War (冷戰) era, although he said he would continue to pressure the communist-led country on democracy and human rights.

Obama and Castro met in Panama (巴拿馬), where they were both attending a summit of leaders from across the Americas (美洲).

Speaking to reporters later, Obama made plain the two countries would still have their differences.

“We have very different views of how society should be organised and I was very direct with him that we are not going to stop talking about issues like democracy and human rights and freedom of assembly and freedom of the press,” he said.

The two men agreed in December to move to normalise relations, including seeking to restore diplomatic ties that were broken off by Washington (華盛頓) in 1961.

The 83-year-old leader took over as president of Cuba (古巴) in 2008 when his older brother, Fidel Castro (卡斯特羅), stepped aside because of ill health.