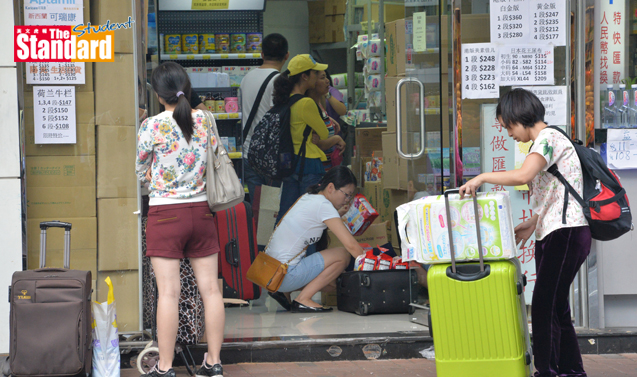 A special task force led by Chief Secretary for Administration (政務司司長) Carrie Lam Cheng Yuet-ngor (林鄭月娥) will step up efforts to crack down on all parallel trading, including by those from Hong Kong.

Leung’s comments follow the release of a circular by the Ministry of Public Security (公安部) that Shenzhen citizens holding annual entry permits to Hong Kong can enter the SAR once a week with a maximum length of stay of seven days per visit.

Leung said, “I am going to speak a word here, to those who are transporting parallel goods or those Hong Kong residents who are preparing to join them, mainland authorities are very concerned, and they will have serious penalties against parallel goods traders, regardless of whether they are Hongkongers or mainlanders.”

But it was business as usual in Sheung Shui (上水), with mainlanders, believed to be parallel goods traders, pulling their luggage, shopping in pharmacies and tuck shops and busy packing their suitcases out in the open.

The SAR government will also closely monitor the new policy, which took effect on Monday.

“We will not tolerate any acts by Hong Kong citizens to increase the conflicts between Hong Kong and the mainland, negatively affecting the relations between Hongkongers and mainland people,” Leung said.

He said the government had proposed to the mainland authorities last June to limit the permit to one trip per week, but the delay had been due to the central government being cautious to implement the change and preparatory work.

Leung also criticised pan-democratic lawmakers for “raising difficulties” in discussing the new measure with the mainland government by staging protests in the past year against parallel traders.

Leung said the protests were counterproductive and hurt the relationship between Hong Kong and the mainland.