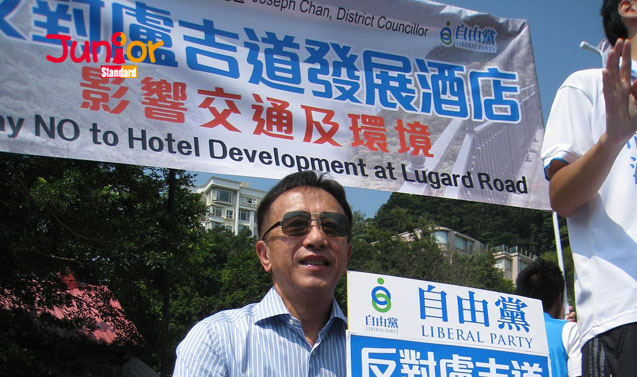 DISTRICT councillors and conservationists staged a rally outside the North Point (北角) government offices to protest against a proposed boutique hotel on Lugard Road (盧吉道), The Peak.

8 April was the deadline for the fifth public consultation for the proposed development, with the board to consider amendments on Friday.

Chan, of the Liberal Party (自由黨), said the width of Lugard Road, a popular hiking and walking spot, is only 1.8 metres and electric vehicles transporting hotel guests would be about 1.4m wide, making the road even narrower for pedestrians.

He said thousands of people, including mothers with prams, use the road and the proposed 1,158 square-metre hotel would increase congestion.

The Alliance for a Beautiful Hong Kong (美港聯盟) has been campaigning since 2013 against the proposal and vice-chairwoman Rebecca Abraham said last Wednesday that the Town Planning Board and the developer should ‘start afresh’.

The group has collected 133,000 signatures in its public petition against the development. “The decision made by the Town Planning Board [in 2013] was wrong. They did not ask enough questions,” Abraham said.