Health chief: get the flu jab 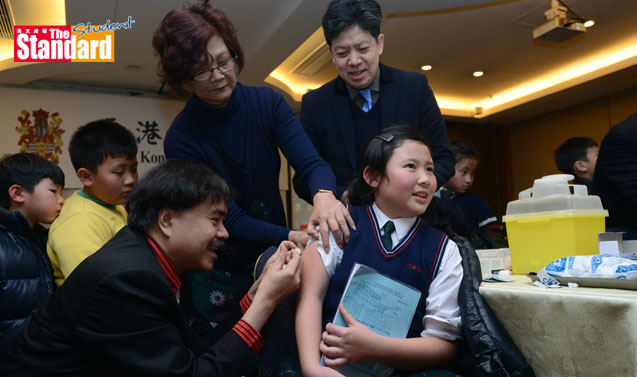 HONGKONGERS have been urged to get vaccinated against the flu, even though the vaccine is less effective against the H3N2 strain, which has been prevalent this winter.

The call was made by the Centre for Health Protection (.生防護中心), which said the overall flu activity has continued to increase, with the predominating virus being H3N2.

In the first 17 days of this month, there have been 41 cases of flu associated with admissions to intensive care units, in which 10 were fatal, the centre said.

The second week of the year, ending 10 January, saw the average consultation rate for flu-like illness at 51.8 cases per 1,000 consultations.

Twenty-five outbreaks occurred in schools and institutions during the second week.

However, Ko said it is still beneficial for members of the public to receive the vaccine to protect against other types of flu strains.

“I think the vaccine provides a certain protection which is better than not getting vaccinated.”

He also said Hong Kong may develop herd immunity if many more people get vaccinated against the flu. So far, about 210,000 have received the flu vaccine, which is similar to last year.

The United States (美國 ) has also seen flu cases at ‘elevated levels’, with H3N2 also the most predominant virus, the centre said.

Forty-six states in the US reported widespread flu activity, with at least 45 child deaths and a surge in the hospitalisation rate of children and the elderly.

Last Thursday, the US Centers for Disease Control and Prevention (美國疾病控制與預防中心 ) said the flu vaccine has been only 23 percent effective this season for all people.

“H3N2 viruses have been predominant so far this season, but about 70 percent of them have been different or have ‘drifted’ from the H3N2 vaccine virus.”
This probably accounts for the vaccine’s reduced effectiveness, the centre said.

Children from six months to six years old, and the elderly aged 65 years and over, are eligible for a subsidised seasonal flu vaccination.