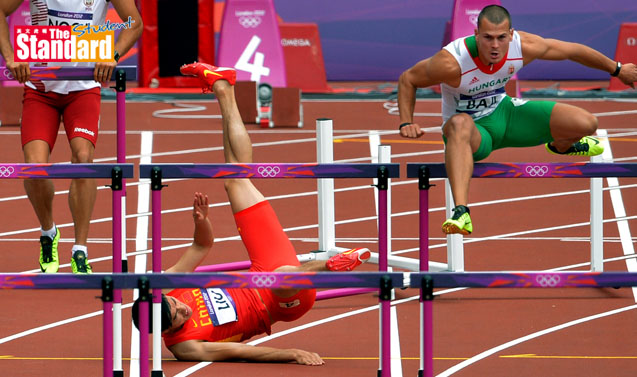 The 31-year-old, Shanghai-born athlete became an icon in China after he won the country’s first Olympic men’s track and field gold medal in the 110 metres hurdles in Athens (雅典) in 2004. He also won a world championship medal in 2007 and held the world record in 2006 with a time of 12.88 seconds.

“I’m retiring. I want to start a new journey,” Liu said in a message posted to his Weibo (微博) microblog titled “My track, my hurdle” (我的跑道、我的欄), blaming injury for his decision. “Though I still have hot blood pumping through my heart, my leg has time and again told me no.”

One of China’s most popular athletes, his gold medal at the 2004 Athens Olympics brought him fame and fortune rivalled only by basketball player Yao Ming (姚明) but also made his life more like that of a rock star and placed a huge burden of expectation on him

Liu’s ambitions were checked when, despite being favourite to win his pet event in front of home fans at the 2008 Beijing Olympics, he was forced to pull out with an Achilles tendon injury in his first-round heat.

In a country where sport and politics are tightly interwoven and elite athletes are handpicked from a young age to be nurtured by the state, his withdrawal was met with tears, anger and accusations that the athlete had let the nation down.

At the 2012 Olympics in London (倫敦), Liu was disappointed again by injury, crashing out of competition after stumbling on the first hurdle and ending his hopes of regaining the Olympic title.

Liu’s retirement makes him the latest world-class Chinese athlete to sign off from competition in recent years.