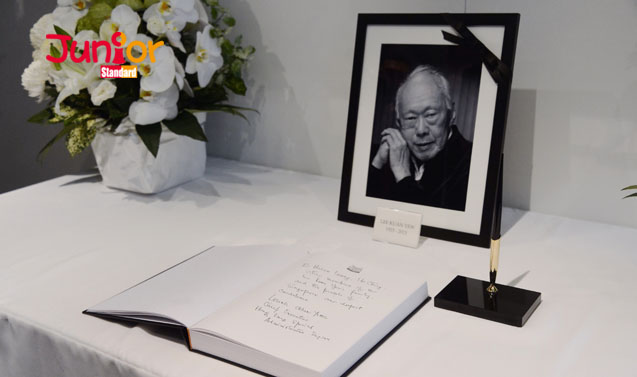 LEE Kuan Yew (李光耀 ), the founder of modern Singapore (新加坡), who was both feared for his authoritarian tactics and admired worldwide for turning the city-state into one of the world’s richest nations during his 31 years in power, died on Monday. He was 91.

Lee was admitted to Singapore General Hospital (新加坡中央醫院 ) on 5 February for severe pneumonia and was later put on life support.

The Prime Minister’s Office (總理公署) said in a statement posted on its website that Lee “passed away peacefully” at the hospital at 3.18am on Monday morning.

The country’s first and longest-serving prime minister, Lee guided Singapore through a traumatic split with Malaysia (馬來西亞) in 1965 and led the transformation of what was then a sleepy port city into a global trade and finance centre. Although he could have remained in office for much longer, he stepped aside and handed over leadership of the ruling party, and the country, to a younger generation in 1990. Still, he remained an influential behind-the-scenes figure for many more years until his health deteriorated.

“In the end, my greatest satisfaction in life comes from the fact that I have spent years gathering support, mustering the will to make this place meritocratic, corruption-free and equal for all races – and that it will endure beyond me, as it has,” Lee wrote in his 2013 book, One Man’s View of the World.

“Lee’s views and insights on Asian (亞洲) dynamics and economic management were respected by many around the world,” Obama said in a statement.

Lee’s legacy includes an efficient government with little corruption, a successful public housing scheme, low tax rates to attract foreign investment, excellent schools and clean and safe streets, all of which have helped Singapore rank consistently near the top of surveys of the most livable cities for expatriates.

He faced criticism, though, for using tough tactics to consolidate power. He jailed some political rivals without trial for decades and brought defamation lawsuits against journalists and opposition politicians, which had a chilling effect on dissent.