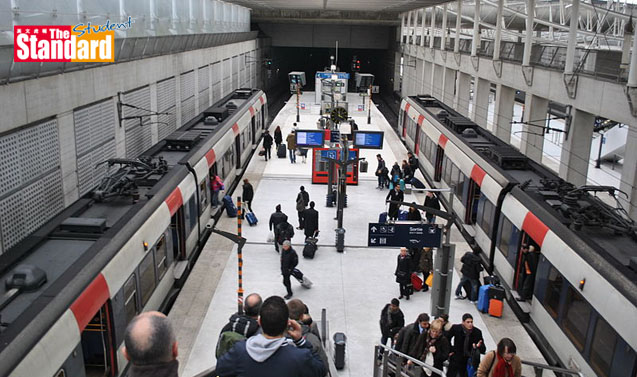 THE Chinese embassy in Paris (巴黎 ) has taken the rare step of warning mainlanders and Hongkongers to avoid taking the train from the centre of the French (法國) capital to Charles de Gaulle Airport (戴高樂機場) following a spate of robberies in recent weeks.

The embassy issued the travel notice last week after at least four incidents were reported on the RER B train in recent weeks, including one involving a Hongkonger taking the 40-minute ride from central Paris to Charles de Gaulle Airport.

The start of the known incidents involving Chinese was on 19 February.

A mainlander had a bag stolen, which meant missing a flight home.

Then, on 6 March, a young Chinese national studying in Paris suffered “a very huge loss” in a robbery, according to embassy staffers.

Two separate robberies were reported on 10 March, when a mainlander on a business trip and a Hong Kong tourist had property stolen while on the train. Both missed their flights.

Methods used by the thieves include one of them dropping coins then, while a helpful tourist helps pick them up, accomplices pounce and grab bags and other belongings.

Or it can involve spilling a drink on a tourist. With the apparently clumsy one helping the target clean up, the others move in.

Other tactics theives have used include snatching bags and other items while train doors are closing to avoid being chased, distracting with an impromptu show, or simply chatting to visitors and creating openings for thefts.

The suggestion from the embassy is to stay off the rails. Chinese tourists travelling between downtown Paris and the airport “should use airport buses, taxis or other transport and avoid taking the RER B line”.

The notice comes as many Hong Kong people prepare to fly on Easter holidays, and France remains a major destination because of the strong Hong Kong dollar and the weak euro.