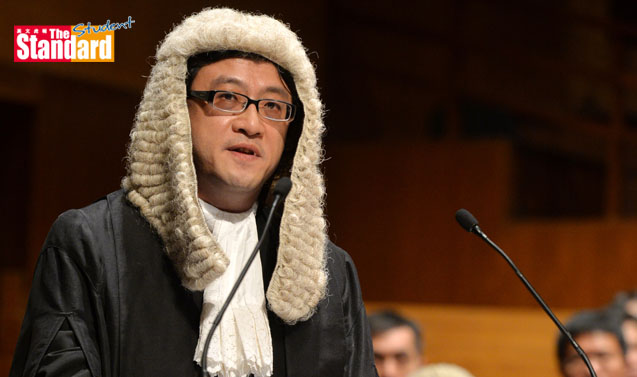 “Comical as it may sound, the government in Hong Kong has become accustomed in recent years to preface almost every description of what it does by the phrase `doing so according to law ... Everything is done according to law,’” Shieh said.

“Such repeated notions demean the law and deflect attention from the real issue.”

Shieh made the remarks during the opening of the legal year, where the Occupy Movement and its impact on the rule of law dominated the speeches.

Shieh said those who insinuate that judges have become part of the “machinery of oppression”, or that they are “succumbing to pressure and beginning to ‘cooperate’ with the government” just because they rule against protesters “is to apply double standards”.

But he said it would be self-deceiving “to gloss over the deficiencies of the [National People’s Congress Standing Committee, 全國人民代表大會常務委員會] decision and the underlying discontent by repeating the official classification that the movement was ‘unlawful’”.

Secretary for Justice (律政司司長) Rimsky Yuen Kwok-keung (袁國強) said in his speech the pursuit of universal suffrage should not be given as a justification of the movement’s “unlawful action”.

He added, “Can there be universal suffrage without the rule of law? I would, without doubt, say ‘not possible!’”

Yuen further dismissed claims of political retribution in courts as he stressed the Department of Justice (律政司) would “never allow prosecution to be used as a political instrument, still less as a means to achieve political revenge”.

Chief Justice (首席法官) Geoffrey Ma Tao-li (馬道立) said court decisions were made in accordance to the law, as shown in the “detailed, reasoned judgments that were given”.

Ma added, “Whatever one’s beliefs or motives, the rule of law and all that it represents, must be respected by all. There can be no compromise.”

The Bar Association and the Law Society (律師會) also slammed political parties for calling on them to provide backing for politicians’ causes, emphasising their independent and apolitical status.