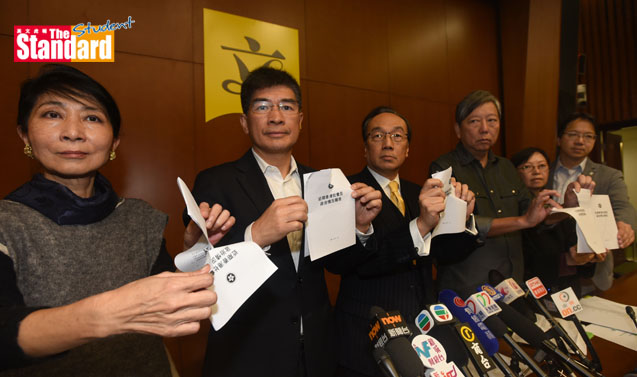 THE government has adopted a gloves off approach on Occupy Central (佔領中環) in its report on public sentiment about events in Hong Kong after Beijing’s (北京) decision on electoral reforms.

The 220-page report, published last week, contains a collection of materials in the public domain as well as a three paragraph disclaimer that says: “This report is written based on relevant events, statements, and opinion polls obtained from public sources by the HKSAR government; and has covered all categories of opinions to the best of our knowledge, though we cannot guarantee that opinions ever expressed by each and every group or person are included.”

It is followed by a 190-page timeline account of events of interest during this period, including the entire 79-day Occupy Movement and the firing of tear gas at activists on 28 September.

“The police announced in the afternoon that day [28 September] that they would cordon the area in the vicinity of the [Central Government Offices (CGO, 政府總部)] and appealed to the participants of the unlawful assembly to leave in a peaceful and orderly manner. However, scores of protesters assembled in Admiralty (金鐘), occupied the roads, charged police cordon lines, and resulted in repeated large-scale scuffles with the police. The police used tear gas in Admiralty and Central (中環) repeatedly in an attempt to disperse the crowds,” stated the report.

The report was released online and was also submitted to the State Council’s Hong Kong and Macao Affairs Office (國務院港澳事務辦公室). It said that the Occupy Movement had gained momentum following the class boycott led by student groups on 26 September.

“[The Hong Kong Federation of Students (香港專上學生聯會)] and Scholarism (學民思潮) called on the crowd to retake Civic Square (公民廣場) at night. Students suddenly forced their way into the CGO East Wing (東翼) forecourt without authorisation, causing chaos,” read the report.

In its concluding remarks, the report states that the government is committed to implementing universal suffrage for the 2017 chief executive election.