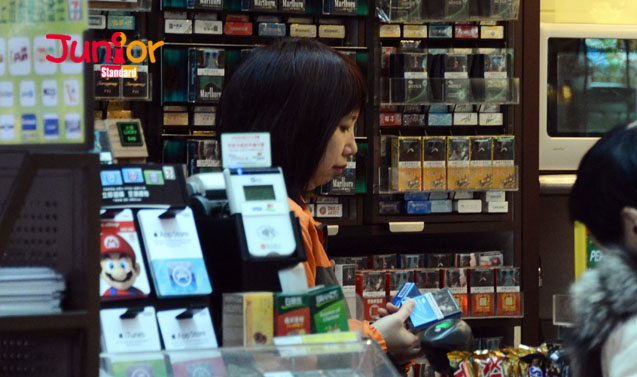 COMPANIES have found an enticing way to circumvent the laws on tobacco advertising – girls in colourful uniforms carrying boards displaying certain brands of cigarettes at pubs, restaurants, bars and clubs.

They do not sell the cigarettes but are willing to play various electronic games with customers who can win souvenirs such as cigarette lighters. Winners are then asked for their contact details.

The Council on Smoking and Health (COSH, 吸煙與健康委員會) was alerted to the practice a few months ago and chairman Antonio Kwong Cho-shing (鄺祖盛) said authorities are powerless to stop it.

“There are different forms – girls jumping from one bar and restaurant to another. They are quite active in the SoHo (蘇豪) area as well as Jordan (佐敦), Tsim Sha Tsui (尖沙嘴) and Prince Edward (太子),” he said.

“We have been told this is not a form of tobacco advertisement. At the moment, it is a loophole they can exploit. There is nothing we can do based on the present legislation. That is the feedback from the Tobacco Control Office (控煙辦公室).”

The Smoking (Public Health) Ordinance (《吸煙（公眾衛生）條例》) prohibits tobacco companies from giving cigarettes, cigars or pipe tobacco to anyone for promotional or advertising purposes.

It is also against the law to sell any tobacco that is accompanied by a gift or a token that may be exchanged for a gift or discount on a product. Both offences carry a maximum fine of HK$25,000.