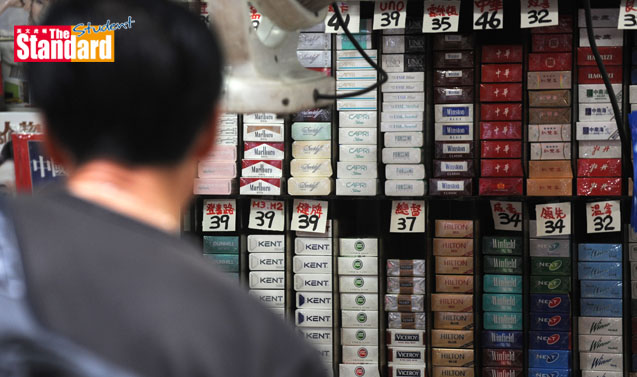 HONG KONG should follow Australia’s (澳洲) lead and force cigarette manufacturers to use plain packages to deter young people from taking up the habit, according to the Council on Smoking and Health (COSH, 吸煙與健康委員會).

“The whole idea of having glamorous cigarette boxes is to attract people to take up the habit. Plain packaging helps by making the boxes less glamorous,” said chairman Antonio Kwong (鄺祖盛).

“It has helped Australia. They did a lot of research on the colour of the boxes and then the brand image has definitely gone down.”

Australia was the first country in the world to implement plain packaging in December 2012, while France (法國), Ireland (愛爾蘭), England (英國) and New Zealand (新西蘭) have begun the process of introducing the scheme. In Australia, cigarette packets are olive green, with large health warnings and no branding.

Kwong said that while the council has been advocating for plain packaging since 2012, little has been done.

“Our hands are tied. The ball is in the government’s court. An amendment of legislation is not an easy thing,” he said.

Secretary for Food and Health (食物及.生局局長) Ko Wing-man (高永文) promised to cut smokers’ tobacco use before assuming office in 2012.

According to the council, smoking causes nearly 6,000 deaths in Hong Kong every year and a further 1,324 non-smokers die from second-hand smoke.

As well as the lives lost, the SAR also experiences a yearly economic loss of HK$5.3 billion.

“However, the smoking rate has been declining ... it was 23.3 percent in the 1980s. We still have 645,000 smokers and quite a number of hardcore smokers. It takes a lot more to encourage them to quit,” Kwong said, adding that plain packaging with larger health warnings would be an effective deterrent to would-be smokers, especially teenagers.

COSH also wants the government to increase the tobacco tax by at least 57 percent to further reduce smoking.