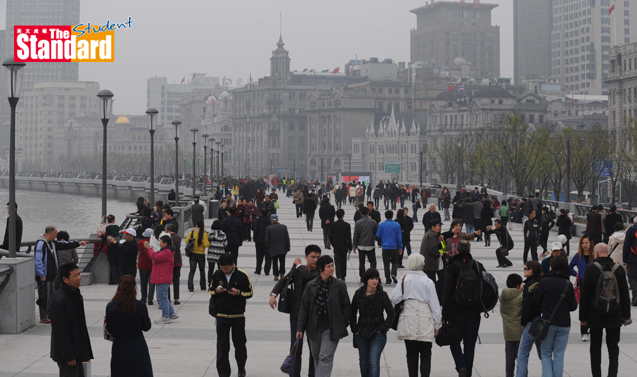 A STAMPEDE killed at least 36 people during New Year’s Eve celebrations in Shanghai (上海), authorities said, but police denied reports it was caused by people rushing to pick up fake money thrown from a building overlooking the city’s famous waterfront.

The government in China’s gleaming business capital said large crowds started to stampede on Chen Yi Square (陳毅廣場), in the riverside area known as the Bund (外灘), just before midnight.

It was the worst disaster in the cosmopolitan city since 58 died in an apartment building fire in 2010.

The cause of the crush has still to be confirmed, though state media and some witnesses have said it was at least partly triggered when people rushed to pick up coupons that looked like bank notes.

A man named Wu, who brought one of the 47 injured to hospital for treatment, said the fake money had been thrown down from a bar above the street as part of the celebrations.

But Shanghai police said on their official microblog that while closed-circuit television footage did show some bills had been thrown from a bar in a building overlooking the Bund, which a small number of people picked up, this did not cause the crush.

“This incident happened after the stampede,” police said in a brief statement, without saying what the real cause was.

Another witness, surnamed Wei, said there had been a problem away from the area where the fake bills were thrown, with people trying to get on to a raised platform overlooking the river.

Xinhua news agency (新華社) said that people had been trampled on after falling down on the steps up to the platform.

“We were caught in the middle and saw some girls falling while screaming. Then people started to fall down, row by row,” a witness surnamed Yin told Xinhua.

Some Chinese media outlets carried criticism of the authorities for lack of adequate policing and planning.

Police officer Cai Lixin (蔡立新) said they did not have a large presence on the Bund as there were no formal New Year events planned, Caixin magazine (財新網) reported.