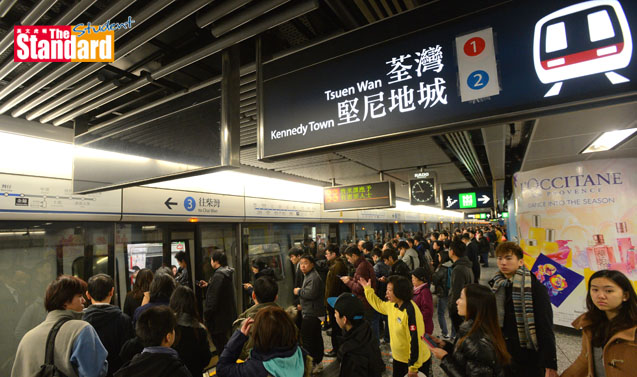 Services ran relatively smoothly with only a minor hiccup at around 7am when the signal system broke down, which took two minutes to reboot on a train waiting at Kennedy Town (堅尼地城) station.

He said the signal system was working slower than usual.

“We also found that when a train arrived at HKU station (香港大學站), the automatic platform screen doors did not open smoothly and were slow,” he said.

“We are looking into whether it was related to the train or the facilities around the tracks. We will collect data for fine-tuning the system.”

Some passengers said the Central (中環) and Admiralty (金鐘) stations were more crowded during the morning peak hour as many had to alight to change lines.

“Many more people [now]. Usually could not get into the train,” a woman from Kowloon waiting at Admiralty said.

Other commuters admitted they had left their homes earlier than usual in case there were any delays.

A commuter surnamed Tsang said he left home earlier because he was worried that there would be more passengers.

“I thought there would be many passengers getting into the train before Sheung Wan (上環) station ... I was worried that the passengers at Admiralty may not even be able to get into the train.”

As of 11am, about 28,300 passengers used the West Island Line. Around 12,000 people had passed through the new Kennedy Town station and 15,000 used the new station at Hong Kong University.