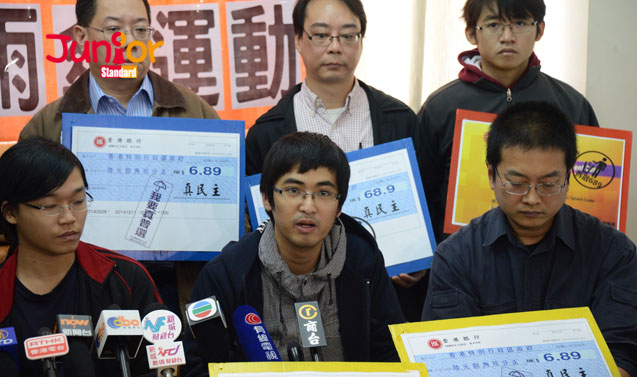 THE Hong Kong Federation of Students (HKFS, 學聯 ) and a coalition of 20 community organisations have agreed on the next step for the Umbrella Movement (雨傘運動) of raising government administrative costs in processing public housing rental and tax payments.

The government has completed the clearance of protest sites, but the movement is not coming to an end. Rather, it will continue to transform into different forms, Federation Secretary General Alex Chow Yong-kang (周永康) said.

They will ask public housing tenants to delay rental payments from the current deadline to the last day of the month, while taxpayers are asked to split payments into multiple cheques of HK$6.89, HK$68.90, HK$689 as the number ‘689’ represents the number of votes Leung Chun-ying (梁振英) obtained to become chief executive.

Coalition representative Au Lap-hang (區立行) explained the aim is to continue the fight for true democracy by pressuring the government. The SAR (特區) currently has 2.3 million public housing residents and 1.74 million taxpayers. “The housing and tax policies are very unfair to the Hong Kong people,” Au said.

Secretary for Justice Rimsky Yuen Kwok-keung (袁國強) said Hongkongers should not “accede to the suggestions” made by the Federation. “I do not think it is a wise act, or a wise suggestion to follow,” he said. “I would not agree to any act in breach of the law, or to cause any further disorder in society.”